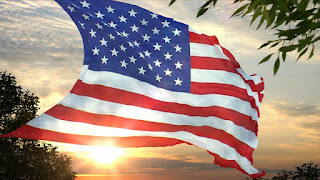 Let me say as I begin this post, I love The United States of America! I was born and raised in this nation. I am an American! I served in the United States Air Force for 6 years. I spent 3 years of that time living in Germany. Germany is a very beautiful country, and the people were very nice. But...living there didn't compare to my returning to my homeland.

Some people today, even Christians, say that to love a nation is to commit idol worship. They say it is putting the nation above God. But they just don't know. Truthfully, our founders exalted God above the nation by establishing it on principles from His Word. They desired a nation whose government would be in the hands of its people, not in tyranny or a monarchy. The term "We the people" came out of the heart of "We the people of God".

There are folks, American folks who are quick to complain about our nation. There are some who like to criticize. Surely our nation is not perfect, and we are facing some serious problems currently. But in fact, most of these problems are actually created by people who just don't know. They just don't know how special America is.

America, hence the American people, are no more special in God's eye's than any other people on the planet. But in the very founding of this nation there was a desire to freely serve and honor God. There are folks within our country that don't want you to know about our founding. They are eliminating vital parts of history that explain how America was founded for God, and then blessed by God. Many of our History books are currently devoid of some of the heroes (black, white, and red), whose lives and actions prove that this nation was NOT founded for the purpose of enslaving humans, but for believing, proclaiming, and showing that all people are created by God, and created equal.

As some of you know, I've been involved in missions for many years. I've been on three continents (so far) and to at least eleven nations. No where in my missions travels have I found a land more blessed than The United States of America. If you don't believe that, you just don't know. As I walk through customs and immigration each time I enter this country, I thank God for the visible blessings God has bestowed on America! Why has God done this? Listen carefully. "Blessed is the nation whose God is the LORD, The people whom He has chosen for His own inheritance." (Psalm 33:12)

America did not just flippantly decide to make God the Lord of this nation after a hundred years or so of existence. No. Men, women, boys, and girls left Europe (and other lands) to seek out a nation where there would be freedom to worship God. In addition, they came to better themselves, out from under the hand of oppression from government and religious tyranny. Many folks died during the journey. Others died from cold and disease during harsh winters. But thank God they kept coming.

Through my missions travels I have had many conversations about America. People want to come to America. In my work I meet new people every day. Many are from other nations. Recently I deliberately asked a young lady from a Middle Eastern nation why she was in the States. She said she had an opportunity to attend an engineer school right here in Huntsville, AL. Others have told me that everyone wants to come to America because of the opportunities it offers. Why would folks from right here in America criticize her? Because they just don't know. They don't know the truth. America has been blessed by God, and we church, must stand for her as we seek the face of our God, in her behalf!

Whenever and wherever there is a catastrophe in the world who is always there? Who has always been there over the centuries? America. In my life time I've seen nations invaded by despots, and liberated by America. The mindset of the American people since it's founding has been "Let freedom ring!"

As long as the body of Christ (the church) can freely worship, share the gospel, live out loud for Jesus, and intercede for our nation, God will continue to bless. However, the time is RIGHT NOW for the church to rise up. Not in physical war, but in war against the principalities that desire to take down our nation from the inside. It is the church's responsibility to fight this battle on behalf of our leaders, citizens, and those who just don't know. Don't be blinded to the truth of how our nation was founded! Take it upon yourself to seek out the truth, especially for your children and grandchildren. I have placed a link to an hour-long teaching that explains much of the way things really were, and why there are people who do not want you to know the facts about our nation's founding. Don't wake up one morning to a fallen nation because you just didn't know.