Have You Been Hurt By Church Folks? 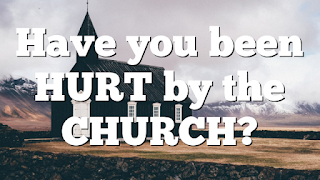 If you've been hurt by the church I'm very sorry. There can be no greater feeling of betrayal than that of being hurt by Christians, who should be exuding the character of Jesus. The sad part is that it happens all the time. It's been said that Christians are the only ones who kill their wounded. Certainly that's not true of everyone and every church, but still, it happens way too often.

Back in 2010, the Barna Group released a poll indicating that 4 out of 10 non-churchgoing Americans said they don't go to church because of negative experiences with churches and/or church members. Too many people have been hurt by church politics, immorality among leadership, traditions that cater more to man than Jesus, and outright unchristian conduct among members.

If you've been hurt by the church, I truly regret that it happened. However, you need to be healed, whether hurt by believers or nonbelievers. All of us have been hurt in some way by other people. If we don't become whole again, we could suffer for the rest of our lives depending on who hurt us and how they did it. And if you are a believer, you have the privilege of being healed by Jesus, the prince of peace. God is "...near to the brokenhearted." (Psalm 34:18) "He heals the brokenhearted." (Psalm 147:3) Isaiah says of Jesus, "He sent me to bind up the brokenhearted." (See Isaiah 61:1) Obviously if you are not a believer all you do is surrender your heart to Him. This gives Him permission to perform spiritual surgery on your heart as He works in your entire life to bring wholeness!

There are two directions one can take if they've been hurt by the church. I just talked about one of them above. Forgiveness and wholeness. The other direction is unforgiveness and bitterness toward those who have hurt you. Bitter people simply do not have a proper perspective of the church and its people. Let's face it. You don't have to get hurt by a church member to see that the church and it's people are not perfect. I'm so glad Jesus looked down on humanity and saw a fallen, imperfect, flawed people; and yet He loved us in spite of our faults, so much that He became one of us. He came to the earth to bare our sins and receive the penalty we deserved for not measuring up. As a result, in Him, we are the righteousness of God! We are forgiven! This means we also should be forgivers!

What I described in the paragraph above is grace! By God's grace (not by my works) I am what I am. We must understand, people (including you and me) are not perfect, and there will be times when we hurt others. The truth is that many people who have been hurt, hurt others.

Your responsibility as a believer is to forgive those who have hurt you (for your sake) so you can move forward. It's one thing to be hurt. It's another thing for you to have to carry this burden throughout the rest of your life, missing the best God has for you. You can decide to forgive, receive wholeness, and allow Jesus to use you as a vessel through which others who have been hurt can find healing and encouragement.

Know that no church is perfect, because it's made up of people. People are not perfect. Don't hold unforgiveness toward Christians who have hurt you. Don't hold the whole church accountable for what a few have done. Don't harbor and promote bitterness towards the church, Christianity, and God in general. Why? Because if you claim to be a Christian (even though hurt), you have the responsibility of forgiving them and being healed.

As believers we must condition ourselves with God's Word to respond, not react to to our wounds. God commands that we forgive those who have sinned against us. If we don't, we become accountable for the sin of not forgiving others, and He cannot forgive us. In turn, this creates inroads for the enemy to come in with extreme condemnation and judgment we otherwise would not have to encounter.

Finally, there are people who are genuinely hungry for God. Many of these make up incredible churches who are hungry to serve God in creative, anointed ways. Look for them. But don't expect them to be perfect. Don't shelter in from the church. Instead, be the very vessel God uses to administer love and forgiveness to others who have likewise been hurt. Don't propagate your hurt. Forsake it! You won't regret it!