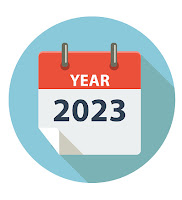 The beginning of the new year is like the turning of a page. Ideas dreamed up in 2022 can be implemented in 2023. New ideas for the future can be conceived in 2023.

One of the most exciting traits of the beginning of a fresh, new year is that fact that much of what God has spoken to me could very well become a reality in the year ahead. I pray that you've been seeking Him as the year nears its end, and that you are hearing new stuff for your life, family, and ministry. I have no doubt that God will speak incredible things about our future if we will just look to Him, and listen to Him in the next few days. Even as we enter into the first few days and weeks of 2023, seek Him, and expect to hear from Him. He is even more excited that we are!

I have to say what I'm about to say because it needs to be said! As you seek Him, heading into the new year, He will not only prepare us for the good, but the not so good as well. That's simply His nature! God is good, and takes care of those who wholly put their trust in Him!

So let me encourage you to look up, listen, and look ahead. Allow God to speak to you about the new year. There are exciting things ahead for you and yours! Allow Him to bring these things into reality in 2023 as you enter by faith with great expectations!

Happy Blessed New Year to you! 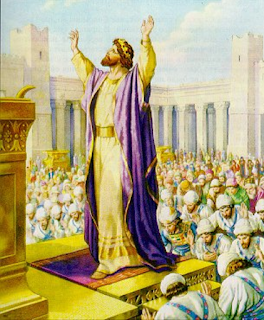 To me, one of the most powerful occurrences in the entire Bible can be found in 2 Chronicles, Chapter 20. This incident involved King Jehoshaphat and the nation of Judah. What's so powerful about this event is what could've happened; what should've happened, but didn't happen! Judah was surrounded by a coalition of enemies. Annihilation was imminent; destruction was unavoidable! However, instead of Judah being obliterated by this coalition of enemies, the coalition of enemies destroyed itself. It took Judah three days to gather the spoils of the victory!

How did this happen? God intervened. But why did God intervene? Because Judah sought the face of God, instead of being motivated by fear to run for the hills. King Jehoshaphat, a Godly king, turned his, and all of the nation of Judah's attention to seek the Lord. "Then some came and reported to Jehoshaphat, saying, "A great multitude is coming against you from beyond the sea, out of Aram and behold, they are in Hazazon-tamar (that is Engedi)." Jehoshaphat was afraid and turned his attention to seek the LORD, and proclaimed a fast throughout all Judah. So Judah gathered together to seek help from the LORD; they even came from all the cities of Judah to seek the LORD." (2 Chronicles 20:2-4)

Jehoshaphat was afraid AND turned his attention to seek the Lord. He didn't react to the fear. Instead, he responded to the fear by setting his full attention on God, not on what could have appeared as imminent destruction! When fear motivates you and me, we tend to imagine every possible tragic scenario. But (like Jehoshaphat), when we know our God, and His promises, we respond to the sudden onslaught of fear by focusing, not on the circumstances, but on God, who He is, what He has done, and what He said.

Then King Jehoshaphat directed this prayer of faith from "Are You not...?" to "Did You not...?" Did you not what? "Did You not, O our God, drive out the inhabitants of this land before Your people Israel and give it to the descendants of Abraham Your friend forever?" (2 Chronicles 20:7) This powerful declaration was actually... "God, YOU DID!"

The essence of the prayer of faith is: "God, You are!" "God, You Did!" And I like this one, "God, You will!" "O our God, will You not judge them? For we are powerless before this great multitude who are coming against us; nor do we know what to do, but our eyes are on You." (2 Chronicles 20:12) Again, this statement, in question form, was actually a powerful declaration of faith. "God, YOU WILL judge our enemies!" Today, from a New Covenant perspective we can add, "God...YOU SAID!"

Instead of preparing for imminent physical war, King Jehoshaphat and the whole nation of Judah were fasting and seeking the face of God Almighty. It's true, they were powerless in this confrontation, nor did they know what to do (in a physical war-type manner). But their eyes were fastened on Jehovah God! The result was miraculous. God required them to go out and see the salvation of God, on their behalf. On the way out, they sang songs of praise, worship, and victory.

As a result of seeking God, fasting and praying the prayer of faith, God spoke through the profit and made it clear to King Jehoshaphat and Judah that He would fight this battle for them. They went out at God's direction, and saw first-hand what God will do to His enemies! As they were going to meet the enemy, God caused massive confusion to fall on their enemies. They destroyed each other. When Judah arrived at the battle scene, their enemies were dead. Again, it took three days to gather and bring back the spoils of the victory!

If you know Jesus, you are His. As you seek to know Him more, to learn His Word and apply it, your prayer will be transformed from powerless to powerful. Never forget, He IS, He DID, He WILL, and He SAID! Trust His Word as you declare it from your mouth! Expect the miraculous!

In this episode I talk about the 4th condition of the soil (from Mark, Chapter 4) Jesus referred to as "The Good Soil". All four soils represent the human heart. But only the good soil, correlating to the "honest and good" heart, accepted and held fast to the seed of the Word, and bore fruit. Be blessed and encouraged! Please subscribe to my YouTube channel. Thank you!

The Cry Of The Helpless 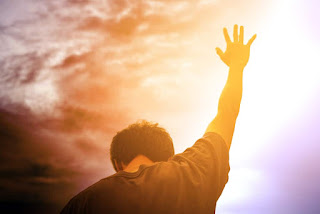 Jesus loves the cry of the helpless. Some folks think being helpless is being weak. Well...it is! It is in our weaknesses that Jesus is made strong in and through us. Paul said, "And He (Jesus) has said to me, "My grace is sufficient for you, for power is perfected in weakness." Most gladly, therefore, I will rather boast about my weaknesses, so that the power of Christ may dwell in me." (2 Corinthians 12:9) Christianity is all about being weak in ourselves, so that Jesus may be strong in us. Paul continues, "Therefore I am well content with weaknesses, with insults, with distresses, with persecutions, with difficulties, for Christ's sake; for when I am weak, then I am strong." (2 Corinthians 12:10)

The very first time I genuinely cried to Jesus for help, He answered my cry. It was 44 years ago this month. I was completely helpless. Our marriage had collapsed and I couldn't do a thing about it. The best I could do (as futile as it was), was to take my own life. I pondered it because I thought it might ease the pain. But because someone had been sharing Jesus with me for the previous 8 months, I cried out to Jesus. He heard me. He answered me. I've never been the same! "In my distress I called upon the LORD, And cried to my God for help; He heard my voice out of His temple, And my cry for help before Him came into His ears." (Psalm 8:6)

There is something about the cry out of desperation that moves the heart of God. For me, my cry was formed from the realization that I was on the verge of loosing everything and being totally helpless. My cry to Jesus was genuine. He came into my heart and my life changed drastically! Out of my complete helplessness, He came into my life when I called out to Him.

God wants to hear your desperate cry! You may not be in a crisis as I was some 44 years ago. However, the cry of desperation simply comes from a heart with a genuine desire to surrender all to Jesus. In my case, Jesus dealt with me at several points in my life. I could feel His love for me, but I kept pushing Him away. Jesus saw that I was on the path of destruction and loss. He wanted to spare me of the pain and agony I was about to experience. I kept pushing Him away until my life shipwrecked! But fortunately for me, that's when my cry of desperation went up to Him. "The LORD is near to the brokenhearted And saves those who are crushed in spirit." (Psalm 34:18)

Your situation may seem to be helpless, but it's not! With God, all things are possible! Perhaps you are where you are, in the midst of what you're experiencing to clearly see the need for the desperate cry to Him. Call out to Him my friend! He will answer your cry! Surrender all so that He can redeem it all, just for you!

By the way, Connie and I are approaching or 49th Anniversary! He heard my cry!

By Steve Hutto No comments:
Email ThisBlogThis!Share to TwitterShare to FacebookShare to Pinterest
Older Posts Home
Subscribe to: Posts (Atom)