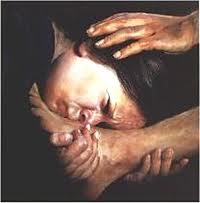 There was an incident in Luke's Gospel, Chapter 7 in which a woman (who was believed to be a prostitute) learned that Jesus was having lunch at the home of a Pharisee. What she did next was what we would call today..."over the top".

Somehow she gets in, finds Jesus, and weeping....wets Jesus' feet with her tears. But that wasn't all. She began wiping His feet with her hair! Was she done? Not really. She also began kissing Jesus' feet, and pouring very, very expensive perfume on His feet. The Pharisee who invited Jesus criticized Him for not supernaturally knowing the woman was a sinner. The truth is, Jesus knew exactly who and what this woman was. But He saw something in her actions that reflected His own heart. Jesus was blessed by this "over the top" treatment He received from her. What Jesus saw by this woman's actions, the Pharisee and His guests did not see.

What did Jesus see in her actions? What was it that grabbed His heart? I am convinced that the actions of the woman indicated a heart very similar to Jesus. How could this come from a prostitute? The truth is, it could have been anyone. It could have been you or me! It was her extravagance that connected with Jesus' heart and moved it. It was her "over the top" treatment of Jesus that touched Him. Why? Because Jesus' own destiny was to go "over the top" for all of mankind.

In the same way, Jesus went way "over the top" for you, me, and ALL of mankind. Think about it. Jesus, God the Son, laid aside His Kingly privileges, left His glory, and became a lowly human. That's "over the top". He, as the Son of God, and the Son of Man was tempted in every area, like us, yet without sin. (See Hebrews 2:18; 4:15) He went "over the top" when He was persecuted, beaten, bruised, and battered...in our place. He went "over the top" as He hung on the cross and gave up His own life so that all of humanity might live through Him. Conquering death, hell, and the grave, and rising three days later was a feat we would all deem as "over the top". Sending God, the Holy Spirit, to dwell within us and upon us until the end of the age was no doubt..."over the top".

It's clear to see how Jesus was touched and blessed by the actions of a prostitute who went "over the top" to acknowledge her love for the One who delivered her from seven demons; and set her free from the bondage of immorality! I understand why Jesus would say of her, "Truly I say to you, wherever the gospel is preached in the whole world, what this woman has done will also be spoken of in memory of her." (Matthew 14:9) This woman loved Jesus so much she went "over the top" in expressing this love.

Remember, Jesus has not given us a spirit of timidity, but of power and love and sound judgment. (2 Timothy 1:7) Thinking about how He expressed His love for me gives me the drive to go "over the top" in expressing my love for Him.