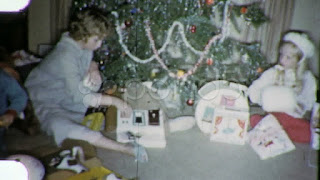 Christmas Eve was an exciting day in my childhood because that evening the family gathered for the first of our Christmas festivities. The festivities included giving and receiving gifts and enjoying some delicious Christmas baking! Some (certainly not me), enjoyed some eggnog (out of the carton)! Christmas Eve was a very special day, however, Christmas Day was the day we kids anticipated the most. It was the Big Day, and it was only hours away!

After we kids cleared the living room floor of all the used wrapping paper, we began to get ready for bed. We knew that in order for Christmas Day to finally arrive, we had to go to bed. It was hard to go to sleep because I knew some really great stuff, stuff I knew my parents knew that I wanted, was about to appear under and around our Christmas Tree, sometime during the night. When I woke the next morning I expected to see that large deposit in the living room! Let me say that this happened every single Christmas until I left home to be married to Connie!

Here's how Christmas morning went with the Hutto kids. We got up early. How early you ask? Most of the time it was anywhere from 2:00 to 2:30am. I did mention we got up early didn't I? I thought so! One of us kids (usually me) would wake the others to alert them it was time! We would tiptoe down the hall to the living room. Understand that we had hardwood floors over a full-size basement in our home. It was hard to walk anywhere in the house without the floors creaking! There was a gas floor furnace in our hall floor. When the heat came on, the furnace would creak and pop as the metal warmed. Sometimes we would wait for the furnace to come on. Then we would move toward the living room under the cover of the floor furnace sound!

It's hard for me to explain the anticipation as we opened the living room door. Of course the lights were off so you could see nothing. We crept into the living room and poised ourselves to turn on the light. Once poised, the light was turned on. It looked like a different room! There were four of us so you can imagine the stuff! We each were designated a little area where our Christmas Day presents were placed. The difference between Christmas Eve and Christmas Day at the Hutto's was that the presents on Christmas Day were unwrapped. You could say they were wrapped by the darkness in the room. Turning on the lights virtually unwrapped all the presents (so to speak)! It's a good thing because the noise of unwrapping literally wrapped presents at 2:30am would have awakened my parents! My parents knew that we would get up early, but they expected us to be very quiet in doing so.

In addition to our Christmas presents, we also each had our stockings stuffed with candy, gum, nuts, oranges, apples, and small fireworks. After examining our presents we would partake of some of the contents of our stockings (excluding the fireworks). About 4:30am we would go back to bed. Waking up later and looking at our presents again was almost as good as doing it the first time! Almost! The day wasn't done yet! There was still Christmas dinner!

There were just a few times we gathered with our Grandparents for a big meal during the year: Christmas dinner (lunch) in our home; New Years dinner in their home; and Thanksgiving dinner in their home. Certainly we grandkids would have meals with our Grandparents next door many times throughout the year. My brother and I slept every single Saturday night at my Grandparents house. There was nothing like watching Gilligan's Island and Gunsmoke back to back on Saturday night with the Grandparents! And these were originals! So we ate with them often. But Christmas Day was one of the BIG family meals we had right in our home.

Toward the evening on Christmas Day, as a child, I would feel a little down because the Christmas season was coming to a close. It would be close to another year until the Christmas lights would go up downtown. I think the only thing back then that dispelled the disappointment was the fact that I had about another week out of school! That really helped!

In mid-October, 1978 I sold out to Jesus. I was faced with an insurmountable crisis in my life. Two thoughts came to my mind during the crisis: take my own life, or give my entire life over to Jesus. Because someone had been sharing Jesus with me for 8 months, I decided to call him. He led me to surrender my life to Jesus! I've never been the same. It has been absolutely wonderful, and it has truly been a great adventure! Christmas took on a completely new meaning for me beginning in 1978. It became a reality to me that the greatest Christmas gift I could ever receive is the gift of eternal life in Jesus Christ. This became available to all of mankind when Jesus came to the earth as one of us over two thousand years ago. Jesus truly is the reason for the season, not only at Christmas, but for life! There is no better time than right now, during this Christmas season to draw close to Jesus and experience His unfailing love.

(The Photo Above Is A Sample Photo.)