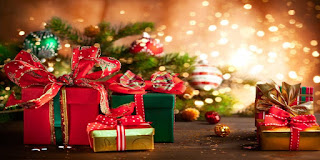 As we near Christmas I want to continue to share some of my Christmas memories. But before I do, let me say that during this season when most of the world at least acknowledges the coming of Jesus, I want to acknowledge Jesus as my personal Lord and Savior. Christmas means more to me today than ever before because of what Jesus has done for me! He came as a little baby, born in a cave in Bethlehem, and laid in a feeding trough. But He grew up, became a man, and bore all my sins on the Cross. He did that for you as well!

Christmas Eve was an exciting day for me when I was a child. It was second, only to Christmas day! On Christmas Eve my brother and sisters spent most of the day finalizing our gift shopping. We didn't have a lot of funds. We had to keep tabs on what we spent, so we wouldn't run out of money before we completed our shopping lists! At the time, Bay Springs was a bustling little town with several shops and businesses where a kid could buy great Christmas gifts. We went up and down the streets, from store to store looking for and purchasing gifts for all of our family members. Then we would hurry home, wrap them, and place them under the Christmas tree. The stage was set for our Christmas Eve gathering in our home!

The greatest challenge for me on Christmas Eve was the wait. You know, that period between placing the gifts under the tree and actually opening them later that night. My Dad and Granddad owned and operated a pharmacy which stayed open until about 7 O'clock (on Christmas Eve). The festivities could not start until both Dad and Granddad were there. The wait seemed endless to me as a child. It was as if time literally stopped! Eventually the day seemed to move forward again and evening arrived!

Usually either Dad or Granddad would get off an hour or so before the store closed. But the other one would stay of course, to close the store. When the final family member arrived, the rest of us were already sitting around the tree, eager to rip off the Christmas wrapping and see who gave us what! Then finally, it began! It was wild! We kids were life ravenous vultures, having just discovered a 2-day old road kill! (Should I tone down that last descriptive statement? Nah.)

After opening the gifts and evaluating the contents we would have some delicious Christmas baking. This was such a very special night for me, and my siblings. Our Grandparents lived next door so they were always just a few steps away. What a joy it was to be with family on this special evening. But this was just a warm-up for what would come next; that is if we could go to sleep that night! We were just hours away from the BIG day...Christmas Day!

As we draw near to the Big Day, Christmas Day, let's not forget the reason for the season. Jesus Christ. As Connie and I raised our own children, we taught them from very early on, Christmas was ALL about Jesus. The gifts were possible because of His blessing on us.

Let's remember as we celebrate His coming, that He came to take away the sins of the whole world! Merry Christmas!