How Much Is He Worth To You? 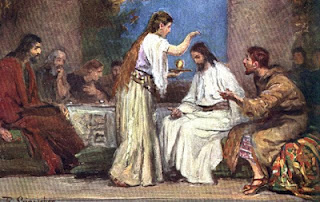 I heard a sermon recently that really made me think about something. The message was from Mark Chapter 14 about the woman who broke the alabaster vial of very expensive perfume, and poured it on Jesus' head. Some of the people in the room became indignant remarking to one another, "'Why has this perfume been wasted? For this perfume might have been sold for over three hundred denarii, and the money given to the poor.' And they were scolding her." (Mark 14:4-5) Jesus told the complainers to leave her alone; that she was doing something good for Him! "For you always have the poor with you, and whenever you wish you can do good to them; but you do not always have Me. She has done what she could; she has anointed My body beforehand for the burial. Truly I say to you, wherever the gospel is preached in the whole world, what this woman has done will also be spoken of in memory of her." (Mark 14:6-9)

This event happened just before Jesus was arrested and crucified. In order to not leave Him on the cross, due to the approaching Sabbath, He was taken down and laid in a borrowed tomb temporarily. The plan by some was to anoint His body after the Sabbath. However Jesus rose from the dead very early on the first day of the week (the day after the Sabbath). Some of the women came to the tomb with anointing oil and spices and He wasn't there! No problem. The woman with the alabaster vial of very expensive perfume had already anointed Him. This was amazing and shows us that God's plan will be accomplished. He was anointed, beforehand, for His burial because He wouldn't be around to be anointed as a dead person!

Something else about this event amazes me. It's not clear how or where this woman got the perfume, but she had it. If the disciples were correct it was worth a year's salary. I'm sure to anyone in that day, this was a very large amount of money. Can you imagine spending a whole year's pay on a bottle of perfume?

I've heard this called extravagant worship many times, and I believe it. The woman was criticized for her actions, but the criticism was of no value to her. She could take it. Anointing Jesus was the most valuable thing to her. NOTHING else mattered to her.

What an example for you and me. How valuable is Jesus to you? Better asked, how valuable is what He has done for you? Is it so valuable that nothing else matters? Is it so valuable that what people say doesn't matter? How about what you think they might think? Oh that we would fall so in love with Jesus, that literally nothing else would matter! And like this woman, we would pour out ALL of our love and worship...on Jesus alone, no matter what the cost. This is truly extravagant worship!
By Steve Hutto
Email ThisBlogThis!Share to TwitterShare to FacebookShare to Pinterest