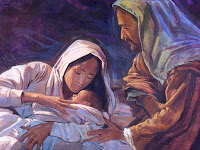 As we enter the Christmas season I wonder how many of we  Christians will understand the significance of His coming? Sure, we all know that Baby Jesus in the manger is what it's all about, right? And of course, Jesus is the reason for the season.

Fact: What folks truly believe is the way they live their lives. So, will your Christmas season reflect your deep love for a King who came to His own creation? And don't get me wrong. Traditions aren't bad, and should not have to be abandoned if they don't swallow up your passion for the true meaning of Christmas.

Christmas is all about God becoming a human in order to reach a lost world. The fact that God came to us is awesome. But how He came to us adds extreme significance to the fact that He came. His conception was supernatural. His birth was a miracle. To understand how this happened is more than enough to set any captive free.

Mankind was fallen due to Adam's disobedience in the Garden of Eden. When Adam disobeyed God, sin entered in, and death on the back of sin. Since the day Adam and Eve were expelled from the Garden, every person born into the world is born with the fallen nature of Adam. You and I were born with the same nature: fallen, separated from God. We were born of this world, certainly not of God.

Joseph, engaged to Mary, found out she was pregnant. He wanted to secretly send her away to protect her. A messenger from God appeared to Joseph in a dream (Matthew Chapter 1). He assured Joseph that Mary was with child by the Holy Spirit.

In Luke Chapter 1, Gabriel supernaturally appears to Mary. He announces to Mary that she would bear the Son of God. Mary has only one question: "How can this be since I am a virgin?" To Mary this was not a legitimacy issue. It was a morality issue. She was a virgin. Virgins don't have babies. Gabriel then explains to Mary that, "The Holy Spirit will come upon you, and the power of the Most High will overshadow you. For that reason, the Holy Child will be called the Son of God." (Luke 1:35) No human male was involved in this conception. The Holy Spirit touched Mary. The baby that was born 9 months later was literally the Son of God. He was born of man, and He was born of God.

This little baby had no sin nature at all. Why? Because He was conceived of by the Holy Spirit, carried in the womb of the Virgin Mary, and born of God. He was the sinless Lamb of God who came to take away the sins of the world. He knew no sin, yet He became your sins and my sins on the cross. (2 Corinthians 5:21)

I'm so glad Jesus came. But how He came explains what He did for you and me. Because He was born of God, we can be born of God through trusting in Him. "He is the image of the invisible God, the firstborn of all creation." (Colossians 1:15) Because Jesus is the "firstborn" of all creation, He made the way for you and me to be "born of God" in Him.

This Christmas, I challenge you to ponder this. Think about not only His sacrifice, but how He came to His own. The fact that there was a baby in a manger screams to us that God became a human, through a human virgin. He was literally born of God and because of this, we who have received Him are born of God! If you've received Him, you are born again by the Spirit of God. "Born again" because you were already born into the world. This means that you too, because of His birth, are born of God. Amazing!

(Romans 8:29), "For those whom He foreknew, He also predestined to become conformed to the image of His Son, so that He would be the firstborn among many brethren;"

(Colossians 1:15), "He is the image of the invisible God, the firstborn of all creation."

(Colossians 1:18), "He is also head of the body, the church; and He is the beginning, the firstborn from the dead, so that He Himself will come to have first place in everything.


(Hebrews 1:6), "And when He again brings the firstborn into the world, He says, "AND LET ALL THE ANGELS OF GOD WORSHIP HIM."