A Perfect Picture Of Grace 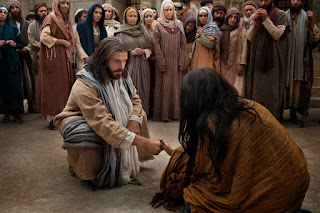 One of the most incredible pictures of grace comes from the 8th chapter of John. It is an incident involving Jesus, the Pharisees and Sadducees, and a woman caught in the act of adultery. I sometimes wonder how the woman was caught in the act. The Bible doesn't tell us how, but it is possible that a Pharisee or Sadducee could have been the "other one" involved.

The Law specifically stated that if a man and a woman were caught committing adultery they BOTH were to be stoned. In this incident they brought forth the woman, but no man was accused. The issue here for the religious leaders was not the woman or the Law; but to try to catch Jesus in something He said to prove He was a false teacher. It never worked because Jesus is not a false teacher.

"Teacher, this woman has been caught in adultery, in the very act. Now in the Law Moses commanded us to stone such women; what then do You say?" Jesus' answer to the religious leaders was the game-changer. "He who is without sin among you, let him be the first to throw a stone at her." (John 8:7) The issue was no longer about the Law, the woman, or accusing Jesus. Now the issue was about  everyone!

It's important to understand Jesus' use of the word "sin" here. From the original language the word implies a specific kind of sin. In this case adultery. He who has never committed adultery, let him cast the first stone. "When they heard it, they began to go out one by one, beginning with the older ones, and He was left alone, and the woman, where she was, in the center of the court." (John 8:9) They could not stone the woman because of Jesus' words! None of them were without sin. Especially adultery! There was only one person on the scene that day totally without sin - Jesus!

Jesus stood up (from stooping and drawing in the sand), and said, "Where is everyone? Did no one condemn you?" "No one Sir". "I don't condemn you either", Jesus said. The Pharisees and Sadducees had no authority to condemn the woman and Jesus' words brought that truth to reality. Jesus, because He was the only One without sin, could have condemned her. He was the only One qualified to stone her, but He didn't. Instead, He pardoned her. This is a beautiful picture of grace.

Before releasing her Jesus gave her some instructions. "Go. From now on sin no more." The word "sin" used here is different from the word Jesus used earlier. This word means "To miss the mark and as a result, to not share in the prize." Her current life-style was the result of a whole life-time of missing the mark Jesus had set for her life. But things were about to change. The grace extended to her (in the midst of a mob that wanted to stone her to death), will put her on the course God set for her before the world was founded! Jesus  did the same for you and me over 2000 years ago. We no longer have to miss out on the prize! Jesus has come, and through the sacrifice of Himself we never have to miss the mark again! We never have to fall short of His glory because what He has done! Grace! Grace! Grace!

Understand that from this perfect picture of grace in John Chapter 8 we see God's grace extended to us by Jesus' sacrifice on the cross. Yes, we are forgiven, pardoned, and NOT condemned. And because of this, we are empowered by His grace to walk forward, free of not only the sins we have committed in the past, but of those in our future. We must learn to appropriate His grace by trusting in His love for the rest of our lives. Whatever you may be struggling with today, remember, He has dealt with those sins. You never have to miss the mark again!