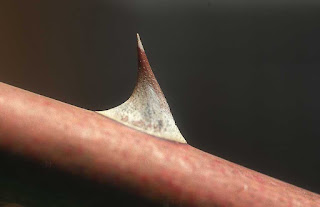 Paul made it clear WHY he experienced this thorn in the flesh. To keep him from exalting himself (being prideful), concerning the incredible revelations he had had. He was caught up to Paradise some fourteen years earlier. He said it twice: "...to keep me from exalting myself"...in the above verse. So it is clear why he received this thorn in the flesh.

Paul implored the Lord three times that this messenger of Satan (a.k.a. a thorn in the flesh) might leave him. And I believe three times God's response was, "My grace is sufficient for you, for power is perfected in weakness." (2 Corinthians 12:8-9)

If you think about it, this message from Satan had a two-fold purpose. First, to keep Paul humble. And second, to promote God's infinite grace. Is God awesome or what! A messenger from Satan is nothing more than a pawn in the hand of our mighty God!

What would a messenger of Satan, given to Paul, say to Paul? I will venture to say it had to do with his past. Paul was a very bad dude before he met Jesus. "But Saul (later called Paul) began ravaging the church, entering house after house, and dragging off men and women, he would put them in prison." (Acts 8:3) He continuously made threats of prison and even murder, to those who were disciples of Jesus. He was on his way to Damascus with permission to apprehend and drag back to prison, men and women who professed Christ, when he met Jesus himself!

Paul makes this statement some time after his conversion..."I am the least of the apostles, and not fit to be an apostle, because I persecuted the church of God." (1 Corinthians 15:9) This is not simply Paul's humility speaking. It's obvious he struggled with the fact he persecuted the very church he now loved and served.

We know Satan is a liar. But he is also the accuser. Even in your life and my life, the enemy accuses us of our past failures and mistakes; much of what is true! We all have done things we regret; things we are ashamed of. The enemy is always accusing. But listen to Paul's next statement: "But by the grace of God I am what I am, and His grace toward me did not prove vain..." (1 Corinthians 15:10) This is the power of God's grace! Even though Paul couldn't deny such accusations, God made him who and what he was. Paul's right-standing with God was not based on what he had done, but on who God is! No matter what we've done, or how we've failed, God's grace is sufficient!

When Paul implored the Lord to remove this thorn in the flesh, God replied, "It doesn't matter if you violently ravaged my church and drug folks from their homes to prison, My grace makes you innocent in my eyes! And that's more than enough for you!" (Steve's slight paraphrase.)
The message from Satan was humbling, because Paul was ashamed of what he had done in the past. But the same message was the ground for God's infinite grace to be applied in his life! The grace of God was sufficient not for Paul to hang on and bear the shame of his past. Instead, it was sufficient to make Paul completely innocent before God, no matter what he had done. God's grace was more than enough to make Paul a powerful vessel through which this grace flowed.
Why did Paul implore the Lord to remove this thorn in the flesh only 3 times? Why not more? Because the third time he got it! He understood it! He understood now - that in spite of his past, in spite of his short-comings, and in spite of his human weaknesses, that by God's grace he was what he was.
When the enemy comes to you with a message about your past, be humbled by the fact that it may have happened. But be encouraged by the fact that the grace of God He has made you innocent in His eyes. Through His grace you are what you are. And what you are is awesome, because He is awesome!
By Steve Hutto
Email ThisBlogThis!Share to TwitterShare to FacebookShare to Pinterest