Can God Be Eliminated? 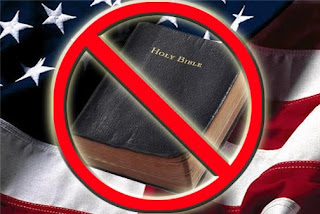 Since about 1963 the spirit of anti-Christ as begun it's ploy to eliminate God from the lives of human beings. The only way it has gained ground over the past 50 years is through humans allowing it to happen. This ploy has been allowed by humans just a bit at a time, over time. Take a look back from the 2015 vantage point and you can see how much the spirit of anti-Christ has accomplished.
God has been banished from America's public schools. Attacks on the Word of God are becoming more frequent and aggressive. Just recently Brandon, MS High School band was not allowed to perform its half-time show because it contained a "religious" song in the line-up. This all stemmed from suit filed by one, single student in 2013 because the student was offended by a religious meeting held on campus. (According to Fox News) A judge ordered the meeting to stop, as well as anything with religious connotations on campus (which would include religious music played). The judge threatened to fine the school $10,000 if another violation occurred. Scared, spooked, and cowardly, the school prevented its own band from performing their half-time show.
The good news though, is that parents and the students began singing the very song (From the home-side bleachers) that caused the band to be banned. You may have already seen the incident captured on video by more than one person. The video has gone viral!
There is further good news. God cannot be banned. No...He cannot. It seems the more the attempt is made...the more He flourishes. There are those who will stand up for Jesus Christ...no matter what the cost. In our county (U.S.A.) we have allowed the enemy over the past 50 years to come in and begin stealing our religious freedoms. It was ignored at first. It was not even noticed. It was subtle. But in recent years it has become blatant, forceful, and boisterous! Over those 50 years God has prepared (and still preparing) generations who will not bow the knee to the concept of a "godless" society. Nope.
Here is the bottom line. Man, at his very best, can only dream of a godless society. The truth is however, Jesus rules the universe. Things in the world will continue to get worse. The Bible prophesies this. However, where sin abounds, grace super abounds! The darker the night...the brighter the light.
In these last days there will be many who fall away from following hard after Jesus. The pressures of government, man-made religion, and outright godlessness will cause them to fold. However, there are those whom God has been preparing. These are the ones who will rise to the occasion! These are the ones who will not bow the knee to the Baals of our land, and our time. Because of oppression and persecution, the church will flourish; people will dig in deeper to Jesus; and folks will take their stand for Jesus, no matter the cost.
You can ban the marching band. You can cancel the meetings. You can remove every cross from every public place. You can lock the church doors, but God will flourish. He will flourish through His people...the church. As bad as it looks and sounds, God is still in control. He never lost control.
If you are a follower of Christ Jesus let me tell you that you are living in the most exciting, most powerful time ever for His church. Don't you every forget this. You were born for such a time as this! Make the decision now...stand for Jesus Christ. Watch Him do great and might exploits in and through you!

ChristianCinema.com
The biggest Faith and Family Movie Store on the planet. Check it out!