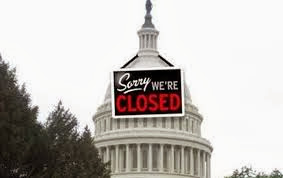 Wow! It would be pretty easy to become discouraged, even fearful over all the events going on in our world today. How about just the stuff happening in the good ole U.S. of A.? It would seem our national government is in the hands of folks who care more about personal agendas, personal gain, party platforms, and political power than about "we the people" who put them in office.

Men and women (yes I said men and women) dig their heels in, refusing to cooperate with one another, demanding their way or the highway. As all this goes down, we find our leaders leading us into yet another government shut-down...an unnecessary event brought about by their lack of cooperation and responsibility. Have you noticed that when government shut-downs, sequesters, and fiscal cliffs are looming...nothing is ever done until the very last minute...or even later? (Maybe it's just me.)

Responsibility to the people represented and their well-being over the past couple of decades has been lowered way down on Washington's priority list. The saddest thing is you and I put them there.

Their seems to be an astronomical devoid of wisdom in Washington. It's not only because of who we are electing, but because of a spirit of confusion and chaos over our capital city. The truth is this spirit of confusion and chaos has spread over our entire nation! How do I know this? Because the folks who elect our leaders pretty much know their beliefs, platforms, and convictions before they are elected, and elect them anyway. Too many vote "party" instead of personal conviction. And when there are really no candidates truly qualified to bring America out of its stupor, we vote for the least of all the evils available.

You know, I wonder what would happen if folks who weren't satisfied with any of the candidates just didn't vote? Sure, people say "Vote anyway. It's our American duty and/or right." But seriously, to vote to just vote when there are no qualified representatives of your political values? That would be like making a financial donation to support illegal drug-trafficking...just because you can!

And now let me be perfectly frank. As bad as it may be, there has never been a better time to trust in Jesus. Prophesying of the coming of Jesus Isaiah says "And the government will rest upon His shoulders." He continues saying, "There will be no end to the increase of His government or of peace." (Isaiah 9 :6-7) Listen to this carefully...Jesus rules! He speaks of Himself in the book of Revelation as the One "who is, and who was, and who is to come". As things get progressively worse...Jesus will be there for those who put their trust in Him. It doesn't matter how bad things get in our country and in the world, Jesus rules and takes care of those who trust in Him. And He provides the one thing that is lacking in our world today...perfect peace. Turn to Him now. Put your trust and hope in Him. In the midst of it all you will find peace. Now that's cool!

Listen up Christian! Put your trust in Jesus. Impact others as you do. Your hope is not in man or government, it is in Jesus. Stop declaring the weakness...even the stupidity of man. That's quite obvious. Instead declare the glory of the only One who can save...even Jesus Christ! Truly trust in Him. Take your stand on His principles. Do not waiver. He is the hope of the entire world!