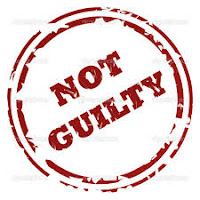 That rushing, overwhelming feeling of joy that comes over you when the officer who stopped you for speeding says, "I'm giving you a warning this time." No, I haven't been speeding, and I haven't been stopped in many a moon. However, I do remember a time or 2 when this has happened. What an exhilarating feeling! It's as if you've been let out of prison! The officer of the law did not deal with me according to my violation!

I remember as a child committing a crime or 2 worthy of the punishment pre-announced by my Dad. So when I was busted he would always say, "Didn't I tell you not too......., and what would happen if you did?" All I could say was a weak, fearsome, and sort of humble "Yes sir." (Humble in hopes he would feel pity for me and well...have mercy.) That usually didn't happen. But every now and then Dad really would have mercy on me. He would say something like, "I going to let you off this time, but you'd better not do it again!" I would feel as if I had been resurrected! I had a new lease on life! Dad didn't deal with me according to my crime! Even though I was guilty and deserved his correction.

I simply love what Psalm 103:10 says. "He (God) has not dealt with us according to our sins, nor rewarded us according to our iniquities." This is the gospel. I mean folks, this is good news! According to the Old Covenant law, I am guilty. You are guilty. We are guilty! Under the Old Covenant to be in right standing with God, one would have to perfectly keep the whole Law...without flaw. James says, "For whoever keeps the whole law and yet stumbles in one point, he has become guilty of all." (James 2:10)

This is our problem. Through the sinful flesh we live in, it is impossible for us to perfectly fulfill God's Law within and by ourselves. If we break one tiny point we are guilty of the whole thing and stand condemned by the whole thing. We deserve to be thoroughly and fairly dealt with (judged) by God.  We deserve the punishment due.

Jesus came and paid the price for our sins and wickedness. Jesus took our sins upon Himself and bore them at the cross. Instead of condemnation and judgment, we can receive mercy and grace through Jesus. Jesus made it possible by paying the price for us!

Paul puts it this way in Romans 8: 1 - 4, "Therefore there is now no condemnation for those who are in Christ Jesus. For the law of the Spirit of life in Christ Jesus has set you free from the law of sin and of death. For what the Law could not do, weak as it was through the flesh, God did: sending His own Son in the likeness of sinful flesh and as an offering for sin, He condemned sin in the flesh, so that the requirement of the Law might be fulfilled in us, who do not walk according to the flesh but according to the Spirit."

Nothing can compare to the overwhelming joy that I am no longer guilty! Nothing comes close to the elation of knowing that He has not dealt with me according to my sins, wickedness, and short-comings. Remember, God's grace and mercy, through Jesus doesn't make us flawless. It renders us guiltless and blameless in the eyes of the eternal Judge. Wow! This is even better than being acquitted from a good whipping by my earthly dad!