A Lesson In Unselfishness

On my recent missions outreach to Honduras I was blessed by so many folks and by so many things that happened. One of the highlights of each trip to Honduras is the one-day outreach to the small village of Concordia.  I've shared some about that already.  But let me say Concordia is a remote village about 3 hours out of the capital city of Tegucigalpa. 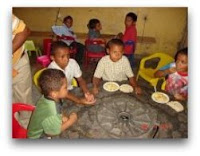 This particular trip we held a class for about 30 children.  In addition we had them bust open a couple of pinatas and just after that they were fed a hot meal of chicken and rice.  I'll have to admit, I was a little concerned that we had the pinata first.  The reason being that the children would each have a big bag of candy each!  I was concerned that the children would scarf up the candy and not be hungry for their hot meal!  But I was wrong!  Immediately following the pulverizing of the pinatas the children were led back inside for their hot meal.  The bags of candy were each laid on their tables or they sat securely in the lap of the child...while they ate their hot meal.  It was clear to me that a full, hot meal of homemade chicken and rice was the priority!

Another incident touched my heart that day as the children were eating their hot meal.  I noticed two young boys were not eating their hot meal or their candy.  One was about 5 and the other was about 9 or 10.  They sat together so they could've been brothers.  I was a little concerned so I asked someone to speak to them in Spanish to find out what was wrong.  They replied that their Mom was hungry and they were saving the food for her.  I nearly cried.  I had someone tell them not to worry.  We had plenty of food for their Mom and we would send her some.  Their faces brightened quickly and they dove into their food.  What a blessing to experience this!  These two young Honduras boys were more concerned for their Mom than their own appetites.  What a lesson in unselfishness!

I will never forget these incidents and what an impact they have  had on me.  It might not mean much for some, but as for me...it is another incident from reaching across our borders that has become a part of changing my life! 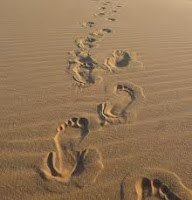 You will probably agree with me when I say one major quality the world lacks today is the quality of leadership.  I'm not just talking about national and world leadership.  I'm talking about leadership period.  The truth is good leadership is actually the affect of serving and following.  It takes a servant's heart to follow. And the greatest leaders are actually great servants.  Check out history.  The leaders who have made the greatest positive impact are the ones who were actually great servants/followers.  Those who have made the greatest negative impact were those who were consumed with self-agenda and exalted themselves by force...the opposite of serving/following.  But then...they weren't really true leaders.

Jesus is the greatest leader example.  He made the greatest positive impact on all of mankind.  Every decision Jesus made while on the earth impacted you and me and myriads of others for all eternity. Jesus is also the greatest servant that ever lived.  He is the greatest follower.  Philippians 2 says that even though He was equal with God, He laid aside His kingly privileges and came to earth as a bond-servant to God.  In John 5:30 Jesus states, "I can do nothing on My own initiative. As I hear, I judge; and My judgment is just, because I do not seek My own will, but the will of Him who sent Me."  He truly gave up all to come to the earth and follow His father. What an example!  What an impact!  Now, when we follow intently after Him, we can impact others as He did.  So in essence, Godly leadership is the result of following intently after God/Jesus.  The principle of Godly leadership is born first out of the principle of following/serving.  That is opposite of the world's principle of leadership.  According to the world, a leader climbs the ladder by deception, dishonesty, degrading others, and self-promotion.

Effective leadership is realized by following the right source!  Here's an example:  A worship leader.  I am always telling worship leaders (which includes every member of the worship team) you cannot lead people where you have not been.  Jesus calls that "...the blind leading the blind."  (See Matthew 15:14)  He said both will fall into a pit! Too many worship leaders are just that...the blind leading the blind.  A true worship leader (one who leads others into the presence of God) will spend quality time in God's presence...worshiping Him.  A true worship leader's priority is to seek God's face every single day in order to follow Him.  When he or she stands before the people they are effective in leading people to God. Why?  Because they've been there and know the way!

Do you really want to impact others?  Are you serving Jesus and others?  If so, keep it up because you are making a difference.  Lay down your personal agenda.  If you are convinced God gave you your personal agenda, lay it before Him anyway.  Serve Him and others.  God will increase the gift He has placed upon you.  Remember...ALL gifts from God are energized by Him only when our first priority is to follow and serve Him and others.  Please pray for all who are in positions of leadership in your world.  But also pray they will be great followers of those who are already making a difference.  The greatest One being Jesus!
By Steve Hutto No comments:
Email ThisBlogThis!Share to TwitterShare to FacebookShare to Pinterest

The most powerful forces available to the planet are prayer and worship.  Both can be forms of intimate communion with God...or they can be powerless forms of religion.  Which are they to you?  In this post I will talk about prayer.

I remember back (I'm talking waaaaaaay back) before I began my relationship with Jesus.  The only worship I thought existed consisted of simply going to a one hour Sunday morning service.