Missions...the Heart of the Great Commission 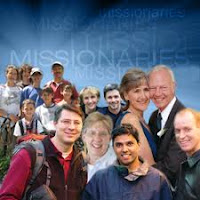 When you hear the word "Missionary" several things probably come to your mind.  For many...a long slide presentation (with 2,016 slides) presented during a Wednesday night church service. Others might get the picture of a person, struggling to get by on the basic commodities of life in order to win someone to Jesus in a foreign land.  While yet others get the picture of an American family living in a walled-in compound, complete with all the comforts of the U.S. (including servants).  All of these are not wrong; because they at least originated from a desire to fulfill the Great Commission issued by Jesus.  In Matthew 28:18-19, Jesus said, "Go therefore and make disciples of all the nations, baptizing them in the name of the Father and the Son and the Holy Spirit, teaching them to observe all that I commanded you; and lo, I am with you always, even to the end of the age."
The heart of the Great Commission is "making disciples of all the nations...".  Watch this closely. Jesus did not mean for His disciples to go and make disciples out of every person in every nation.  He meant they should go and make disciples of/from every nation possible.  Then those new disciples would go and make disciples from their own people and eventually other nations.  Jesus' plan is that there will be disciples in every nation, every people group, and every tribe on the face of the earth.  Because when there is, the gospel will have the potential to spread to every person.  This is the thrust of the Great Commission.  And I am convinced that the vehicle for the Great Commission is what we call today "Missions".
The command was to "make disciples."  What is a disciple?  A disciple is an avid "follower" of Jesus.  A disciple sits at the feet of Jesus (as the original twelve did), and learns from Him, listens to Him, and obeys Him.  A disciple is one who started as a convert, but committed to being a follower of Jesus.  Only disciples can make disciples.  And that's the point.  A disciple must be made.  Jesus spent three years making His original disciples.  They sat at His feet, listened to His instruction, basked in His great love, and carried out His commands.  Only disciples are qualified to fulfill the Great Commission.  Only disciples can change the world...one life at a time.  Only a disciple can be genuine Missionary, who commits to making disciples...anywhere on the planet.
It doesn't matter if one is involved in home missions, foreign missions, short-term missions, or long-term missions; the result must be more than souls saved.  The result must be disciples made.  Disciples change lives.  In my humble (but personal) opinion; short-term missions can be true missions (the thrust of the Great Commission) only when disciples are being made.  Short-term missions are effective when the same people groups are visited over and over.  Believe it or not, the Apostle Paul was a short-term missionary.  He traveled to various places sharing the gospel and winning souls.  He set leaders in place to make disciples out of those converts.  In addition, Paul revisited those places in which souls were saved to make sure disciples were being made.  Paul didn't traverse the inhabited earth because he liked to travel.  The call on His life to make disciples was the perpetual impetus that drove Him.  He would return to his base of operation only to launch out again to tend the churches established on a previous journey.  In addition, this short-term missionary stayed connected to those he won by his letters, also known as his epistles.

All believers should be made into disciples (although all are not), and should be involved in making new disciples.  When a person grasps this biblical concept those near them will be influenced by having their live changed...eternally!
By Steve Hutto
Email ThisBlogThis!Share to TwitterShare to FacebookShare to Pinterest