Why Did God Become A Man? 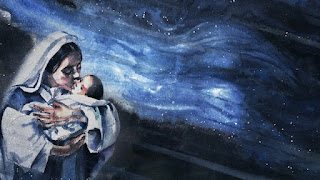 "BEHOLD, THE VIRGIN SHALL BE WITH CHILD AND SHALL BEAR A SON, AND THEY SHALL CALL HIS NAME IMMANUEL," which translated means, "GOD WITH US." (Matthew 1:23)

This prophecy was originally declared by Isaiah the prophet in Isaiah 7:14. It was reiterated by the angel who appeared to Joseph in a dream to reassure Him that the child His fiance was carrying was of the Holy Spirit, not of a man. The word spoken by Isaiah the prophet approximately 700 years earlier was about to be fulfilled. John, the Apostle writes after Jesus was crucified and had ascended back to heaven, "And the Word became flesh, and dwelt among us, and we saw His glory, glory as of the only begotten from the Father, full of grace and truth." (John 1:14) God had truly become one of us. He came to the earth and bore our sins, giving us the privilege of becoming the righteousness God through the offering of Himself.

God became a man through the body of Jesus, the Christ. "...although He existed in the form of God, did not regard equality with God a thing to be grasped, but emptied Himself, taking the form of a bond-servant, and being made in the likeness of men." (Philippians 2:6-7)

So WHY did God have to become a man to redeem you and me? The answer to this question is phenomenal, and clearly sets Jesus apart as the ONLY way to enter the Kingdom of God! Jesus is truly the Way, and the Life, and the Truth.

I want to point out here that Adam and Eve had no sin nature like you and I have before they fell. Yes, they were flesh, but in creating them, God breathed His own breath of life into them and they became living beings. God is totally Spirit so His breath is the very essence of Himself. Adam and Eve were created to live eternally. When the serpent (the devil) came to them, his plan was to deceive them by perverting what God had said to them. He couldn't appeal to their sin nature because again, they had none. It was not in them to lust after immoral things or to rebel by their own volition. So the devil, as the master of deception, deceived them into doing what God had said not to do. Listen to the words of Eve. "Then the LORD God said to the woman, "What is this you have done?" And the woman said, "The serpent deceived me, and I ate." (Genesis 3:13) Eve was telling the truth!

Both Adam and Eve had been deceived. Their decision to disobey God resulted in their handing dominion to rule and subdue the earth over to the devil. The devil became the god of this world. Paul referred to the him as the "God of this world". (See 2 Corinthians 4:4) The devil himself while attempting to deceive Jesus in the wilderness said, "I will give You all this domain and its glory; for it has been handed over to me, and I give it to whomever I wish. Therefore if You worship before me, it shall all be Yours." (Luke 4:6-7) (Underline added.)

Since man is God's own creation, He loves us with an everlasting love. God in His infinite love for man devised a plan to redeem man from the enemy by sending another man. "For as through the one man's disobedience the many were made sinners, even so through the obedience of the One the many will be made righteous." (Romans 5:19) The man was more than just a man. He was God's Son, conceived by the Holy Spirit in the Virgin Mary, and born of God...right from the womb! This man, Jesus, came with no sin nature. He was not created by God (like Adam and Eve), He was God. This man, Jesus, who was God in the flesh could not be deceived into handing over His authority like Adam and Eve. Why? Because He was God.

The devil came to Jesus in the wilderness, just after Jesus had been baptized in the Holy Spirit. It was the Spirit Himself who led Jesus into the wilderness to be tested by the devil. (See Matthew 4:1) It was as if God was saying to the devil, "You messed with my people and deceived them. Come on, pick on me!" The devil tried His best to do the same thing he had done to Adam and Eve, but failed miserably! Jesus overcame Him with the Word of God and the devil left Him. Jesus, at that point, began His three and a half year ministry that changed the world forever!

God came to the earth as Jesus, the Christ. He said of Himself, "For the Son of Man has come to seek and to save that which was lost." (Luke 19:10) Understand that the "that" which was lost was not just man. It was everything man gave over to the devil in the Garden of Eden along with himself. Only through Jesus do we take back our authority to rule and reign over the devil and his forces on the earth. Only through Jesus do we have dominion over sickness, disease, and everything that came about as the result of the fall. Only through faith in Christ Jesus do we quench every single flaming missile of the evil one. ONLY through Jesus, who came as a man, can we be cleansed of all unrighteousness, become the righteousness of our Father God. and enter His kingdom to live forever and ever. Merry Christmas y'all!