Could Jesus Have Sinned If He Had Chosen To? (Part 2) 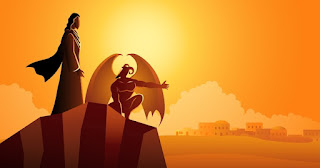 In my previous post I focused on the fact that Jesus had no sin nature. If He had no sin nature, He could not sin. That qualified Him to be offered without spot or blemish for the sins of all mankind. John the Baptist said of Him, "Behold, the Lamb of God who takes away the sin of the world!" (John 1:29) Just five verses later he said, "I myself have seen, and have testified that this is the Son of God." (John 1:35)

For Jesus to literally be the Son of God, He had to be born of God. In Luke Chapter 1 the angel Gabriel appears to the virgin Mary and announced she would bear God's Son.  Mary asked how this would be possible since she was a virgin. Gabriel told her, "The Holy Spirit will come upon you, and the power of the Most High will overshadow you."(Verse 35.) It would be supernatural. The word "overshadow" in the original language means "to envelop in a haze of brilliancy." So when the Holy Spirit came upon the virgin Mary, she was enveloped in a cloud of God's glory! She supernaturally became with child by the Holy Spirit. By the way, the same word is used in Matthew 17 during Jesus' supernatural transfiguration on the mountain. It says that a cloud "overshadowed" Jesus, Peter, James, and John. It was then that Jesus was revealed in His glorified state to Peter, James, and John, while enveloped in a haze of brilliancy. Whenever and wherever the Holy Spirit comes, and the power of the Most High overshadows, things happen and things change!

If Jesus had no sin nature, and couldn't sin, why was He tempted? "For we do not have a high priest who cannot sympathize with our weaknesses, but One who has been tempted in all things as we are, yet without sin." (Heb. 4:15) (Underline added) According to this Scripture, Jesus was "tempted in all things". We must understand the word tempted to understand this Scripture. Here's what it means from the original language: to test (objectively), that is, endeavor, scrutinize, entice, discipline: - assay, examine, go about, prove, tempt (-er), try. We can see that Jesus had to be scrutinized, tested, disciplined, tried and proved as he was prepared for His ministry. Why? "Although He was a Son, He learned obedience from the things which He suffered. And having been made perfect, He became to all those who obey Him the source of eternal salvation..." (Hebrews 5:8-9)

How was Jesus tempted or tested? How was He proven and scrutinized? First by laying aside all of His privileges and becoming a human. (See Philippians Chapter 2) God the Son, the second person of the trinity had to become the only begotten Son of God, born of the Spirit, and born of a virgin, in order to relate to fallen humanity. He had to experience humanity in order to bear the sins of humanity. But unlike all of humanity, Jesus was born from above and had no sin nature. But there had to be more.

Jesus lived on the earth for 30 years without performing one single miracle. The Bible doesn't record Jesus ministering to anyone, not once during His first 30 years. But when He was baptized by John the Baptist, He was also baptized in the Holy Spirit. "After being baptized, Jesus came up immediately from the water; and behold, the heavens were opened, and he saw the Spirit of God descending as a dove and lighting on Him," (Mark 3:16) It was then that Jesus was endued with power from on high to carry out His mission on earth. From there, Jesus was led by the Holy Spirit into the wilderness to be tempted (same Greek word) by the devil.

This is where it gets very interesting. Jesus was indeed tempted or tested by the devil in the wilderness. But how did he do it? The devil attempted to do what he did to Adam and Eve in the Garden of Eden. He attempted to twist and pervert God's Words in an effort to deceive Jesus. Adam and Even had no sin nature until AFTER they disobeyed God. Having the knowledge of good and evil as result of being deceived and disobeying God caused sin to enter in and humanity to fall. The devil knew he couldn't entice them through the lust of the flesh, because it wasn't in their nature. So he deceived them. "When the woman saw that the tree was good for food, and that it was a delight to the eyes, and that the tree was desirable to make one wise, she took from its fruit and ate; and she gave also to her husband with her, and he ate." (Genesis 3:6) It wasn't until after the serpent deceived Eve into believing that the forbidden fruit was good, delightful, and desirable for wisdom that she disobeyed God's rule. The serpent's twisting of God's command by deception caused both Adam and Eve to directly disobey God and suffer the consequences. They never lusted after or craved the forbidden fruit until the serpent lied to them, causing them to change the way they saw the fruit. That was the power of deception, and that is the enemy's most powerful weapon he launches against God's people.

The serpent might have been "crafty" as the Word says, but his craftiness was no match for the infinite wisdom of a power-endued Jesus in the wilderness. Every time he tried to twist, pervert, and misapply God's Words, Jesus countered and overcame with the true, accurate proclamation of the Word. Jesus could not be outwitted and outsmarted because He was the Living Word of God who became flesh and dwelt among us! (See John Chapter One.) When the devil saw that his attempts were futile, he gave up and left. It was at this time that Jesus launched forth into His ministry. This is how Jesus was tried, proved, scrutinized, and tempted in the wilderness.

The wilderness experience was God's plan to scrutinize and test Jesus before launching into Him into the ministry that would change the world. The devil being the opportunist that he is, showed up to twist and pervert God's Word in an effort to deceive. But Jesus overcame every lie satan launched at Him by quoting the purity of the Word of God. Unlike Adam and Eve, Jesus could not be deceived! When the devil was unsuccessful he left. "When the devil had finished every temptation, he left Him until an opportune time. And Jesus returned to Galilee in the power of the Spirit, and news about Him spread through all the surrounding district. And He began teaching in their synagogues and was praised by all." (Luke 4:13-15)

Jesus had to be made in the likeness of humanity in order to be a merciful and faithful high priest unto God in our behalf. He had to be human in order to satisfy the charges of guilt held against us since the day Adam and Eve fell. But He had to be sinless, not only by action, but by nature. That is what qualifies Him to take upon Himself your sins and my sins. This is what substantiates Jesus as the Way, the Truth, and the Life, and gives significance to the way He came to the earth. No one else has come like Jesus. And His is the only name, under heaven, by which we must be saved. There is none other! (See Acts 4:12)

Jesus never struggled with lust after women (or anything else) while He was on earth. He never had to fight the desire to steal money from the money bag Judas supposedly cared for. Jesus never struggled with pride and the desire for power or fame. He never became jealous, not once. Why? Because it was not in His nature to do those things. He had NO sin nature. Remember, Jesus was conceived by the Holy Spirit as the power of the Most High God overshadowed the Virgin Mary. He was literally born of God. Jesus was God in the flesh, and God cannot be tempted to sin.

We are tempted when we are drawn away by our own lust. (See James 1:13-15) That is why we must constantly be in the transforming process as we renew our minds with God's Word. If you know God's Word, you cannot be deceived. If you apply the Word of God to area area of your life, you will always (with God supernatural help) be aware of his evil schemes. There is absolutely no reason for God's people to be deceived. God has given us His powerful Word, the same Word Jesus obliterated satan's attempt to deceive Him in the wilderness.

With all the above said, my prayer is that you see that our Savior, Jesus, was infinitely more than a human being, sent by God, who was God, and because of His supernatural strength, simply resisted the temptation. Yes He was God in flesh, but He was literally born of God, having been conceived by the Holy Spirit. He was literally the only begotten Son of God. He literally had no sin nature. He was truly the spotless, unblemished Lamb of God who has taken away all the sins of the world! Jesus, only Jesus! What a Savior!