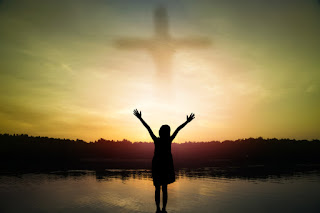 As I look back over a whole bunch of years of walking with Jesus, I've come to the conclusion that Jesus has used me most when I simply live for Him. Living for Jesus is more about being a witness than it is about the formulated process of witnessing. Folks who live out loud for Jesus are simply folks who unashamedly follow after Him. Their lives amplify their commitment to Him...whether in public or in private.

I'm reminded of an incident that happened quite a few years back just after I had arrived in Germany to serve 3 years there in the United States Air Force. Connie and the children, Russ and Stacie had yet to arrive as I hadn't secured a place to rent on the economy. I was staying in the barracks temporarily, until they came. It was in the evening, after work, and I was in the basement of the barracks doing my laundry. I loved studying the Word (and still do) so while the clothes were washing and drying I was reading and meditating in my Bible. A young GI came down the hall and glanced in the laundry room and walked on by. A few minutes later he came back and entered the room. He said, "I see you are reading a Bible." I said, "Yes, I am. I love the Word of God."

As the conversation continued, I learned that this young man was in deep trouble. He had become extremely intoxicated at the Airman's Club a few nights before. A friend offered to take him home to sleep it off at his house. In his drunkenness it was said that he made some inappropriate advances to one of his children. The sad thing is that he claimed he didn't remember it. The friend was intending to file charges against this young, single GI and eventually did.

The young man was devastated. He said he had seen me reading my Bible and assumed I was close to God. He was hoping I could intercede in his behalf. I told him I would be more than willing to pray for him. But I also told him that if he really wanted God's intervention, he needed to surrender his life to Jesus. Then He could move in his behalf - from the inside out! There was absolutely NO hesitation in his response. He said he was ready to pray and surrender to Jesus right then, so I led him to Jesus - right then.

I can't explain in words how desperate this young man was. Let me just say, it was very evident that anything, everything, and all Jesus had for him he received at the very moment we prayed. This young GI turned into a wild man for Jesus. Nothing inhibited him in any way. He began telling every single person he met about Jesus. He did go to trial. I was actually presented with the opportunity to go before the judge in his behalf as a witness to the change in his life. Obviously I didn't know him at the time of the incident, and I made that clear. I was grateful however, to testify about Jesus and how he had touched this young man.

As you've probably gathered, he was convicted. He was sentenced to a year in Leavenworth Federal Penitentiary. I received letters from him over the next several months and beyond. While he was in the prison, he witnessed powerfully and won many men to Jesus! Whether he was guilty or not, he committed to serving Jesus - even in the prison! God used him mightily. We eventually lost touch. But I have no doubt he was committed to serving Jesus for the rest of his life.

I am so glad I was in that laundry room at that time. I am so glad that I wasn't ashamed to be seen reading my Bible. I wasn't handing out tracks. I wasn't looking for someone to nail to the wall with the gospel. I was simply living my new life out loud for Jesus. I love what the Apostle Paul declares in Romans 1:16. "For I am not ashamed of the gospel, for it is the power of God for salvation to everyone who believes, to the Jew first and also to the Greek."

Those who are not ashamed to live their lives for Jesus, are the ones to whom He will present divine connections, divine, appointments, and divine opportunities. Stand up for Jesus my friend. Just live for Him.