What We Can Learn From a Blind Beggar 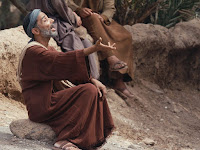 One of my favorite passages from the Bible is the one about Blind Bartimaeus. The account I like best is from Mark 10:46-52. This passage is much more than about Jesus healing a blind beggar. That's tremendous, but God revealed something deeper to me several years ago that really touched my heart.

The incident takes place as Jesus, with His disciples and a large crowd, was leaving Jericho. As they were exiting the city they passed by Bartimaeus, a blind beggar who was sitting by the road. As a beggar, he would be placed at strategic points in the city to beg alms. It was common for beggars in that day to wear a specific outer garment or cloak to indicate to the public they were beggars.

As for me, I think the greatest miracle in this incident was about to take place. It wasn't the healing, as incredible as that was. It was the fact that Jesus stopped when He heard the desperate cry of a blind beggar named Bartimaeus! Jesus heard the genuine cry from a desperate heart and He stopped! "And Jesus stopped and said, 'Call him here..." (Mark 10:49a)

When I read this passage, I am reminded of my own situation years ago. At 4 1/2 years our marriage imploded! A friend and former boss who had been saved only 8 months before had been witnessing to me daily, for almost the whole 8 months! He had been sharing with me how Jesus came into his heart, baptized him in the Holy Spirit, and his life had been drastically changed. I had witnessed the change. When my life crashed I was desperate, so I cried out to Jesus as from the heart of a needy beggar! He heard my cry and stopped! I surrendered my everything (including our marriage) to Him. He healed my heart, Connie's heart, and our marriage! When I cried to Him, He heard me and stopped to minister to me!

When blind Bartimaeus cried to Jesus for mercy, Jesus stopped! Then He said, "Call Him here." All at once the crowd stopped telling Him to be quiet. Now they are saying, "Be encouraged Bartimaeus, old friend. He's calling for you!" Bartimaeus is now standing in the presence of Jesus and Jesus asks, "What do you want me to do for you?" He responded, "I want to regain my sight." (Mark  10:51) "Jesus said to him, 'Go; your faith has made you well.' Immediately he regained his sight and began following Jesus on the road." (Mark 10:52) The Bible makes it clear that Bartimaeus was not born blind. Something happened in his life to cause his blindness. When we cry to God from the heart of a beggar, He not only heals, but He restores what was lost or stolen from us! What is interesting about this account is that the Bible didn't say Jesus laid His hands on Bartimaeus. It was the cry from the heart of a beggar, that stopped Jesus in His tracks, and drew from the anointing on Him. It was his faith that made him well according to Jesus.

Bartimaeus cried for Jesus to have mercy on him. He was not to be denied by anyone, especially the crowd that kept telling him to be quiet. Because of his faith in Jesus, he regained his sight and Jesus invited Him to become a part of His ministry as He traveled the land proclaiming the Gospel of the Kingdom. What a powerful testimony he must have had!

What God revealed to my heart years back was...there was something more significant that the healing. Sure, that was incredible. But what was most significant was the cry of Bartimaeus' heart! He cried out to Jesus in deep desperation. That's what causes Jesus to stop and minister to us too! A quote won't do it. A polite and orderly request won't always do it. But a cry of desperation from the depths of a heart (like Bartimaeus') will capture the heart of Jesus! That's when stuff happens!

Do you need a move of Jesus in your life? Do you deeply desire more of Him? Then cry to Him to have mercy on you! Cry with the heart of a beggar like Bartimaeus. That's what I did years ago. He heard my cry. He stopped! And He changed my life forever! That's what He does.