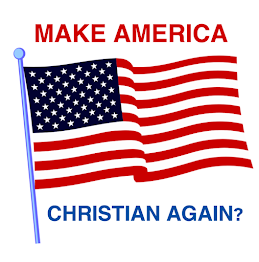 You see, when American was founded, men and women were seeking out a nation in which, and through which to freely serve God. The reason this nation was founded was certainly to escape the tyranny, control, and oppression of England. Many men, women, boys, and girls gave up their lives in order to establish a place of freedom from government and religion. When I say religion, I mean that form of godliness Paul talks about, but denies the true power of the God of the universe who created you and me. Religion is man's feeble attempt to establish his own righteousness before God, in an attempt to be accepted by Him. However, the Holy Bible makes it plain and simple: There is only One way. There is only One truth. And there is only One life eternal. That is Jesus Christ, the Son of God. No amount of acts, or brownie point attempts will ever make us or keep us in right-standing with God. Only total surrender to Jesus will.

There is a way in which to make America a Christian nation again. However, it is very costly. It is so costly that most American Christians are not willing to pay the price. The price is simply living for Jesus, at all costs. It begins with repentance. Repentance is a directional turn-around of 180 degrees. It is not confessing before God that you are a scurvy dog. It is simply a commitment to turn to Him (or back to Him), and to follow Him diligently throughout this life on earth, understanding that this life is not yours, it's His. But this is costly as I said. Why? Because of what you will have to give up. Everything! But what you gain is infinite! "For whoever wishes to save his life will lose it, but whoever loses his life for My sake and the gospel's will save it." (Mark 8:35)

I constantly hear folks talking about how bad 2020 is. Of course, it has not been anywhere near a normal year so far! Who can deny that? But do you realize it is the "norm", at least concerning the church, that has allowed America to drift away from God over the years. The church has been cruising along in a bubble for decades. Inside the bubble we have our church culture, along with our Christianese dialog, promoting distancing rather than separation from the world. Certainly Christians should live by a different set of principles than the world. But if we are to be lights to the world, we cannot cut ourselves off from the world. We must constantly seek God for innovative ways to infiltrate the world with Jesus' infinite love.

I don't think it is coincidence that 2020 has seemingly derailed. I do believe however, that God, in His infinite grace is giving our nation (starting with the church) an opportunity to turn back to him. God wants us outside of our fabricated Christian subcultures to come face to face with the lost, the hurting, and the broken. It starts with our becoming aware of the need first. Personally, I grieve because of the temporary restrictions in place for our health and safety. Not because I am hindered, but because this 2020 scenario makes me eager to be turned loose once again, with a new passion for the lost, and a renewed vigor to radically serve my Jesus at all costs. The lock-downs are most necessary. But they won't last forever!

So during this time of social distancing, quarantine, and lock-down, what are you hearing from Holy Spirit? Are you listening? Are you seeking Him in order to hear Him? Or, as with so many, is this simply an extended vacation for you? Some folks are just waiting it out, hiding in a cave until it all blows over and everything returns to normal. Please understand, the normal you are accustomed to is a thing of the past. I believe that our near future will be different, but better. Why? Because of the folks that are seeking God to move mightily by His Spirit...beginning right in the midst of all that's going on in 2020!

I would love for America to become a Christian nation once again...and she can. But I don't know if she will. It is up to the church in America. It depends on how the church will respond during these challenging times. It depends on whether or not the church will unify in love which Paul says is "the perfect bond of unity" (See Colossians 3:14). But whether America becomes a Christian nation again or not, God wants to move mightily in and through His church to change the lives of millions. The year 2020 happens to be the year that God will begin to move powerfully in and through His church, His body. Do you believe that?