Keep Doing What You're Doing! 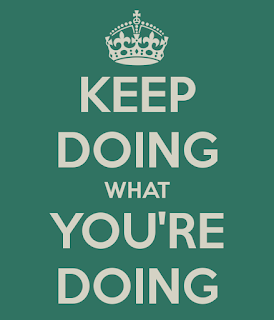 Have you ever felt like what you do doesn't really accomplish much? I mean perhaps you are on a mission to accomplish something God put in your heart. It might be a certain job or business you are building to provide a good future for your family. It might be a ministry God called you to do. It might be an education you signed up for. If you're like me, sometimes it seems that nothing is really happening. I don't think I'm alone in this!

I feel like God spoke to me one time about this as I was actually attempting to encourage someone else. I was telling them that I felt God was saying to them to "Keep doing what your doing." Wow! Those words (which came out of my mouth to encourage someone else) actually spoke directly to me, and I've never forgotten them! "Keep doing what you're doing."

Perhaps that is an encouraging word (phrase) to you. Many times we do what we believe God wants us to do, but we don't see immediate results. We don't even see progress so we contemplate quitting! But many who have succeeded at what they do, succeeded because they kept on doing what they were doing, even though at times it was a drudgery! Someone once told me that a champion is one who never quits. Think about that one. No one ever wins who drops out of the race. You'll never win the race if you don't finish the race. It's the same principle. You'll never succeed if you stop doing what you're doing. So...keep doing what you're doing.

God won't or can't give you new, fresh steps to take if you quit walking. (I think I might just be taking to someone right now.) This is because you have to keep walking in order to take the next step. The next step could be the first step of your break-through. It could be the very step that produces tangible results you would've never seen had you quit and stopped walking. Hello?

And another thing, stop comparing yourself to others. They have they're own destiny. They have their own personal case of "Keep doing what you're doing." You can't "do what they're doing" and accomplish what God designed for you to do.

I'll close with this awesome Scripture verse. "Let us not lose heart in doing good, for in due time we will reap if we do not grow weary." (Galatians 6: 9) Let me translate that: "Keep doing what you're doing!" Your break-through is coming. God has a proper time. His time is the best because He knows best. Oh come on. I'll say it just one more time, "Keep Doing What You're Doing!"