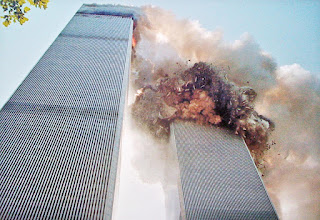 On September 11th, 2001, two thousand, nine hundred and seventy-seven (2,977) people died as a result of the terrorist attacks on the World Trade Center, the Pentagon, and the crash of flight 93. In addition, more than six thousand (6,000) were injured. This attack was the deadliest in all of world history.

We were in Fort Walton Beach, FL for the 2001 Evangel Fellowship International Fall Conference when 9/11 occurred. My son Jonathan, and Pastor G.R. Purushotham from India were with me.

The next morning the three of us were partaking of the hotel's continental breakfast in the breakfast area. If I remember correctly, the TV was tuned to a sports channel and no one was really paying much attention to it. Suddenly a guest comes in very abruptly and shouts, "Turn to a news channel. A plane just crashed into one of the twin towers in New York City!" Someone changed the channel and it was true. It wasn't just a plane though, it was an airliner full of passengers! "What a tragic accident!" I thought. We were wondering (out loud) how an accident like that could even happen. Then the 2nd plane hit the other tower! I cannot explain the horrific feeling I had as reality quickly sank in. This wasn't an accident. It was a planned terrorist attack! The United States of America had been brutally assaulted! To be quite honest, it didn't seem real and it was very hard to process.

We went back to our rooms to watch the event unfold. We saw both of the towers collapse even before we went to the morning service of the conference. So much was going on at the time. The Pentagon was attacked. Flight 93 (a fourth aircraft) disappeared off radar and went down in Pennsylvania. The part that was hard to fathom was the number people that would lose their lives that day. Later the morning meeting of the conference would be transformed into a solemn assembly in which we cried to God for the help of our nation and the world.

Soon after turning the TV channel and seeing the second tower hit, I called Connie (my wife) just to make sure all was well at home. We were several hours apart and I was not comfortable at all being that far away. She was fine, but rattled like the rest of the free world. We prayed together and we agreed that I would take the afternoon to gas up our van. Gas was going fast because ALL flights in the USA were now grounded indefinitely. We would head home early the very next morning. We cut the conference short by one day.

September the 11th, 2001 is a day we must NEVER forget! More people lost their lives on 9/11 than on December 7th, 1941 in the attack on Pearl Harbor. On 9/11 the United States of America would be changed forever.

Today marks eighteen years since that horrible terrorist attack. Connie and I have fifteen Grandchildren today, and only one of them was alive during 9/11. This Grandchild was a year and a half old and remembers nothing about that day. This is why we who lived through it must never forget! In addition, we must inform subsequent generations of what happened on 9/11/01, and how it changed America and the world.

If you don't do anything else on this day, at least pray for the surviving families. Pray that this will never happen again. And above all, pray that we NEVER forget.