Unity Is Your Choice! 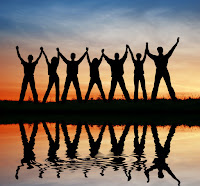 There is incredible power in unity. When 2 or more folks can agree on any issue, they can press through any opposition to their oneness on that particular issue. And when enough people agree on a particular issue, it becomes a mind-set, even a strong-hold. This can be positive (Godly), or negative (evil).

Many sports teams are loaded with great talent. But they don't become potential champions until the majority buys-in to the belief they can actually win any game or match. This has everything to do with good coaching. I remember several years ago a new coach came to my favorite college football team. He kept saying in his arrival speech, we all have to buy-in to the truth that we can and will win most of our games. His greatest task was convincing a team that had two years of mostly losses that they can win any game. It took just a little bit of time, but at the end of his very first year they played again in a bowl game. In this case unity brought success.

Another good example of unity is found in Genesis 11. This is an example of unity working in a negative way. After the flood had destroyed the earth, people began to multiply again. They multiplied and moved east to the land of Shinar. Since they all spoke the same language they planned to build for themselves a city (Babel) whose tower would reach into heaven. God said something interesting about the people of Babel. "The LORD said, "Behold, they are one people, and they all have the same language. And this is what they began to do, and now nothing which they purpose to do will be impossible for them." (Genesis 11: 6) Because of their unity, God referred to them as "one people".

God came down and confused their language in order to stop this attempt. The reason of course, was so different nations would be formed, causing humanity to spread out over all the earth. The heart of God's plan to abate their oneness was confusion. Confusion is just one way to destroy unity. In this case, it is obvious that Babel's plan was not God's plan. So in view of the bigger picture, God had to intervene.

But notice that God said, "...nothing which they purpose to do will be impossible for them." He said that people in unity can perform the impossible, even in a negative sense. So we see in this example from Genesis 11 that unity is a powerful force!

The most powerful of any type of unity exists among those who follow after Christ. This type of unity invokes the supernatural. Mountains move! Roadways are made. Plans of the enemy are thwarted. The impossible becomes possible, because the natural becomes supernatural. Jesus said of unity, "Again I say to you, that if two of you agree on earth about anything that they may ask, it shall be done for them by My Father who is in heaven. For where two or three have gathered together in My name, I am there in their midst." (Matthew 18: 19-20) Unity among believers involves Jesus, the King Himself!

Many believers don't understand the power of unity. Why is this? Because Jesus is not the very center of their lives. Here is another way to put it: They are self-centered. Their personal agenda (even in serving God) transcends God's agenda. Unity cannot be found in self-centeredness. Self-centeredness is a killer of unity. "It's my way or the highway!" Anything that destroys unity is divisive.

Jesus Himself said, "Any kingdom divided against itself is laid waste; and any city or house divided against itself will not stand." (Matthew 12: 25) Any mature Christian who has laid aside their personal agenda in lieu of God's understands this. The problem is that so many don't understand this. The ways of the world have formed their personal agendas. By being conformed to this world (instead of being transformed, see Romans 12: 1-2), believers are becoming vehemently divided by their personal political views. Never before in my life (which is a few years long) have I seen such division in our nation over politics! And even worse politics has divided the body of Christ!

Listen, listen, listen! There is a way to restore unity to the body of Christ and thus see the kingdom of God rapidly spread over all the face of the earth. The same will obliterate the enemy's existence to divide and destroy. This method will also restore unity to your family, and save your marriage. The Apostle Paul couldn't have said it better. "For I determined to know nothing among you except Jesus Christ, and Him crucified." (1 Corinthians 1: 2) Jesus is the solution to division and disunity. No one or nothing else! If you believe that Jesus Christ was crucified to destroy our sins, and I believe that Jesus Christ was crucified to destroy our sins, that is enough! We are brother and sisters, purchased by the same blood of the Lamb. When all is said and done, at the end of the age, all that will matter is...did you believe that Jesus Christ was crucified for your sins and my sins? Our religious differences won't matter. Our political differences won't matter. Our theological divisions won't matter. There is enough power in the above fact to change the world, heal our land, heal your family and see your loved ones saved! Yes it is!

There is infinite, life-changing power within the unity among those who believe in and follow after Jesus. As I mentioned early on, confusion will bring about disunity. But it works the same way on the enemy. When believers agree to walk in unity, it brings confusion to the enemy. Get in agreement with the salvation your brother and your sister walks in. Watch the enemy divide and fall as a result of it. Commit with me to make the basis of our agreement the cross of Jesus Christ! Nothing else first. Not religion, not sports, not theology, not History, and certainly not politics. Let's be determined, like Paul. The other things of this world won't matter when we stand in the presence of King Jesus. 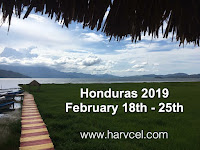 For more info on how you can help us reach Honduras February 18 - 25 visit www.harvcel.com. All donations are secure through PayPal. Thanks!
Steve Hutto
By Steve Hutto
Email ThisBlogThis!Share to TwitterShare to FacebookShare to Pinterest