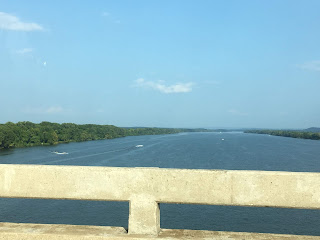 I recently was traveling from Gainesville, Georgia to Elkmont, Alabama. I like to travel, but I get a bit antsy when delayed a bit. Being on a Saturday I figured traffic through the ATL wouldn't be bad at all. I was wrong. When I got in the downtown area, everybody within several counties decided to show up! What's this? I mean all the pro teams were out of town for the weekend. I kept my focus on Jesus however, as He compelled me to view some of the sites that normally I can't view because of the rush of traffic through the area. It was a beautiful, sunny day, and the buildings were gleaming under the blue skies. I hadn't noticed before. I actually began to enjoy it! I finally got through metro ATL, and headed out of town on I-20.

My plan was to shorten the trip by avoiding Birmingham. I took some backroads to I-65. The drive was beautiful. This route took me over some extremely beautiful lakes, and through some foothills. This was cool. Just before I crossed over I-59 I discovered a Starbucks in a truck stop. What a great place to refuel, I thought to myself. (Actually I said it out loud.) Oh, and I would get some gas too!

I made it to I-65 North avoiding Birmingham and putting me only about 45 minutes from my destination. As soon as I got on the interstate the traffic came to a complete stop! No! Yes! A complete stop! When it did move again, it was only for about 20 feet, and then it would stop again. As it turns out, it was road construction. Road construction? On a Saturday afternoon? This was totally and completely UNACEPTABLE!  I could feel my antsy level beginning to rise again. But then something happened. I looked to my right and beheld the most beautiful sight (see photo above). My antsy level began to sink rapidly! As a matter of fact, it disappeared. God's peace began to overwhelm me. I hadn't noticed before, but I was stopped on a long bridge. It was the bridge over the Tennessee River. What a view God provided for me, simply to make my travel more enjoyable! Is He good or what! (The preceding was actually a statement, not a question.)

Knowing God by being a follower of Jesus Christ is the greatest adventure of my life. Having the Creator of the universe do seemly insignificant things to make my day better shows me I am infinitely significant to Him! By the way, after I had taken in the beauty of the Tennessee River from an exalted view; and after I had taken a couple of photos, the traffic started moving again. I arrived in Elkmont a happy, blessed traveler because of God's simple goodness toward me!

Here is my recommendation to you. This comes from my own personal experiences. The next time your antsy level starts rising, look around. Listen and observe. God wants you to see something; something that will bless you to the bone! He's a good God.

(Please visit my podcast at: http://srhutto.buzzsprout.com/ Thank you!)
By Steve Hutto No comments:
Email ThisBlogThis!Share to TwitterShare to FacebookShare to Pinterest

I have spent some years working in retail management. I could probably write a book and fill it with unique encounters I had with customers. Once a man approached me (as a manager) and asked me if he was getting a discount on his purchase. I asked him why. His answer was that he had to walk from the men's department (where currently the register was closed), to the women's department to an open register. The distance was about 25 yards...maybe. Let me add that at that point of the day traffic was very slow. It was normal for us to leave certain registers closed until later in the day when traffic increased. My answer to him was a pretty solid, but extremely nice "No". His was reply was, "You can't blame a guy for trying!" I thanked the gentleman for his business and he went on his way. Actually, this particular encounter was a little humorous!

But then there are those customers who can really be unreasonable about getting something for nothing. In my early days of retail I encountered a customer who brought back a completely flattened, rather large, 6-volt flashlight. This brand offered a life-time warranty. However, one condition not covered was neglect. It was quite obvious to me, this flashlight had been extremely neglected! As a matter of fact, the man told me he had run over it with his truck. When I told him I couldn't help him because the flashlight did not simply stop working...it was flattened like a pancake, he demanded to see a manager. The manager came and told him the same thing I told him. He jumped up and down, screamed, and said "This is false advertising! You said this had a life-time warranty!" My manager tried to show him where it clearly said neglect would not be covered. Then he began to argue that this was not neglect. He just didn't realize the flashlight was lying in the middle of his driveway. Sounds pretty much like neglect to me! My manager finally gave in to the guy and gave him another flashlight just to keep him from making a scene. If this man was right in the head (which I am sure he was), he knew he was taking advantage of the situation and getting something for nothing.

So let me share one more encounter. A man came in with an item that was literally destroyed. His angle was that our receipt said "Satisfaction guaranteed, or your money back." He said he was no longer satisfied with the item. It was obliterated! He tore it up. He wanted a new one. Forget warrantees. Some how he had torn it up and thought he should have a new one. And because it was torn up, he wasn't satisfied with it anymore! We ended up having to give him a new one, and if I remember correctly, it was so old, we didn't have anything close! He took advantage of an honest promise on the back or our receipt that was made to help folks who really needed it. Oh, did I mention, several years back the company took that saying off the back of the receipts due to so many people taking advantage of it the wrong way. Those who were truly honest, and truly deserved help were the ones who lost out on that one.

The desire to get something for nothing permeates all cultures. I would say it is part of the human, fallen nature. There are certain "worldly" traits we should grow out of, especially if we are followers of Jesus Christ. I know someone is thinking "The grace of God is a free gift." Yes it is. But is it really something for nothing? I don't think so. Jesus said, "For what will it profit a man if he gains the whole world and forfeits his soul? Or what will a man give in exchange for his soul?" (Matthew 16:26) So on the one hand, you can gain the whole world, but because you forfeit your soul it profits you absolutely nothing. On the other hand the last part of that Scripture says that in order to save your soul, you give everything. Here's another way to say it. If you gain the whole world, in light of eternity, and in light of God's kingdom you really have NOTHING. And what will you give in exchange (salvation) for your soul? EVERYTHING!

The truth is, God's grace is a gift we didn't deserve. But to receive and walk in this gift, we must give Jesus everything. So God's gift of salvation is not something for nothing. The price for our sins is the precious blood of the Lamb of God, Jesus Christ. To receive this gift my entire life becomes His. Oh, but what a deal!

(Please visit my podcast at: http://srhutto.buzzsprout.com/ Thank you!)
By Steve Hutto No comments:
Email ThisBlogThis!Share to TwitterShare to FacebookShare to Pinterest

Are You A Vampire? 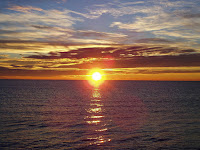 I don't know about you, but I have always been a morning person. My Dad used to say I was like a vampire in the older movies. In the movies they would sleep in the day because they fled from the light. Then when darkness fell, their eyes would pop open and away they went prowling about doing...well, you know. Actually I didn't prowl about at night (because I am not a vampire), but my Dad's analogy was that when I awoke, usually very in the morning, I awoke rather abruptly and briskly. He would say my eyes would pop open, I would offer up a big smile, and immediately hop out of bed. That was his way of saying I was a morning person. Yes, I was and still am a morning person, but NOT a vampire!

I'm glad I'm a morning person. To me it's the freshest, most special time of the day. I enjoy watching the sun come up as I hang out with Jesus. I get the most out of each day by starting early.

Each new morning is a fresh beginning for everyone. It's a great time to start a trip. It's a great time implement change. It's just a great time. The greatest thing about rising early in the morning is that I can ponder the truth that God's mercies are new and fresh - every morning. "The Lord's lovingkindnesses indeed never cease, For His compassions never fail. They are new every morning; Great is Your faithfulness." (Lamentations 3: 22-23) Interesting! Gods love and His compassion never cease. But they are new every morning! That's an incredible way to begin any day!

Now you may not be a morning person. But that's alright. Because no matter when you start your day, God's lovingkindnesses are new and fresh. Today as you begin your day, ponder the truth that God's mercies, His grace, His lovingkindnesses are fresh and new. The beginning of your day is a great time to ponder His goodness and how you can walk in it throughout the day. He truly loves you and desires you to be aware of His love the moment you awaken to start the new day. So.....good morning to you!

(Please visit my podcast at: http://srhutto.buzzsprout.com/ Thanks!)
By Steve Hutto No comments:
Email ThisBlogThis!Share to TwitterShare to FacebookShare to Pinterest

By Grace, Through Faith