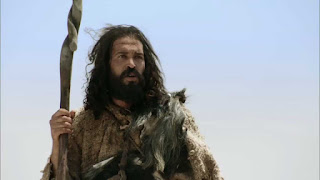 Talk about a different dude. John the Baptist fits the bill. I didn't live back then (believe it or not), but it is evident he was different. For starters, he lived out in the wilderness. Why? Because he wanted to separate himself from everyone else. In all fairness to John, God probably had something to do with that. John the Baptist dressed differently. Yes, I know they all dressed differently back then (from us), but he definitely dressed differently than his contemporaries. I mean come on, a camel skin? Quite different, even in that day. The Bible says he ate differently. Wild honey and locusts. Wild honey? That means he encountered a few bees just to get a meal.
But the thing most unique about John was his message. And even though he lived out in the wilderness (separated), when he preached he went where folks could hear him. Many people were drawn to his preaching because of the message he proclaimed. "Get ready! Prepare your hearts! A new King is coming! He will be the Son of God Almighty!"
Yes, John was different. He was filled with God's Spirit while in his mother's womb. How could he not be different? And what I can clearly see is that John was a foreshadowing of one who later would be part of the body of Jesus Christ. John was a Billboard pointing to the future church. How could John come close to being a pre-representation of a member of God's New Testament church, a Christian? Just listen.
Like John the Baptist, a follower of Christ is in the world...but not OF the world. "Therefore, come out from among their midst and be separate', says the Lord..." (2 Cor. 6:17). A Christian should be separate from the flow of this world's systems. This may be offensive to some, but a Christian, believer, Christ-follower (all are the same) should live "counter-culturally".
Jesus made a controversial statement when He said, "The world hates me, because I testify of it...that its deeds are evil." (See John 7:7) Pretty powerful statement but true. Our very lives should be a testimony that the world and all its deeds are against the flow of the Kingdom of which we are now citizens. Therefore our lives should testify that "this world's systems are evil." And also "But....there is a better way! A new Kingdom with a new King!"
John's the Baptist's message said, "Repent and be baptized for the forgiveness of sin." John's baptism couldn't save anyone as Jesus had not yet offered Himself. Instead his baptism was an outward declaration to the world and all its systems that "I am through with you! I am turning my heart back to the Father. I declare that I am dead to the world, and awaiting the arrival of the One who will make me alive to God!" His message and baptism of repentance called for a commitment (from the heart) to turn back to God; to live for Him. When Jesus came and began to preach, the first thing He said was, "Repent, and believe in the gospel (of the kingdom), for the kingdom of God is here!"
In my humble opinion, John the Baptist's gospel of the kingdom of God explains clearly the significance of water baptism. And the message itself declares that becoming born again involves much more that reading a tract, hearing a short presentation, or even repeating a short prayer after someone else. Salvation, as provided by Jesus' finished work on the cross involves much more than "missing hell and hitting heaven". It involves a total sell out to Jesus Christ now; here; in this life. It is complete death to the world (baptism), and resurrection life to God (being brought up out of the water).
As I said recently in a previous post, in the early church when a person believed in the gospel of the kingdom, (entrusted their entire being to Jesus Christ), they adamantly looked for water to be baptized. It was extremely important because again, it was a declaration. "I am now dead world! And I am now alive to Jesus! I commit my entire life to being a testimony against you world; that your deeds are evil! I am now a citizen of the kingdom of God!  No turning back! No turning back!"
Many of the folks who heard John the Baptist's gospel, and were baptized by him were the very ones who left everything and followed Jesus. Men like Peter, Andrew, James, and John. Their hearts were turned to God in such a way that they would recognize and receive Jesus, God's Son when He came. At the very words "Follow Me." They dropped everything and followed after Jesus. Perhaps Jesus is saying to you today, "Come and truly follow after Me."

Finally, John the Baptist's message and baptism were extremely radical. So radical it cost him his life. We must understand the gospel of the kingdom is extremely radical today. It is subversive to religious, social, and political correctness systems. Today following after Jesus requires living life in a radical manner. Radical because the "narrow path" leads directly against the "broad path" of destruction the world offers. Tell me, will you be a billboard for the Kingdom of God?
By Steve Hutto
Email ThisBlogThis!Share to TwitterShare to FacebookShare to Pinterest