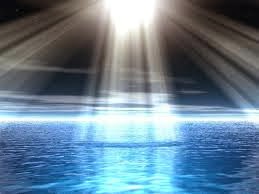 Many times when there was no answer, no solution, and no way in sight, those words spoken were just about as good as if the crisis was completely over. "It will be alright." In most instances the crisis didn't go away immediately, but the words gave me faith and courage to see it through.

Today those words continue to comfort me in the good and the bad. Except the One who speaks those words to me now says it just a bit differently. "It's alright", because He is the Alpha and the Omega, the Beginning and the End. He is as much my "Present" as He is the First and the Last.

I have formed an addictive habit over the years of spending time in the presence of Jesus' Spirit, the Holy Spirit. There's something about His presence that gives me a different set of eyes and ears. They are His eyes and ears. In His presence I see and hear things the way He sees and hears them. The mountain to you and me may look enormous. But to Jesus there is no mountain. In His presence we can begin to see the mountain as Jesus does: nonexistent. When the storms of your world howl and roar remember, Jesus hears no storm. To Jesus the storm is nonexistent. Why? Jesus rules over storms.

Being in the presence of His Spirit doesn't mean your storm or your mountain will go away immediately. It could. But it does mean you will find the strength and the courage to see it through. Whether the storm continues or stops you will see it through. With God all things are possible. People begin to realize this in His presence.

If you are like me, you need to hear from God. Build on your relationship with Him. Spend time in His presence. Jesus said, "It is the Spirit who gives life; the flesh profits nothing; the words that I have spoken to you are spirit and are life." (John 6:63) When He speaks to you, He speaks spirit and life. Therefore He speaks life to your spirit. When that connection is made you will also hear "It's alright". And do you know what that means? It's alright.