Let's Improve The Beauty Of Our Feet! 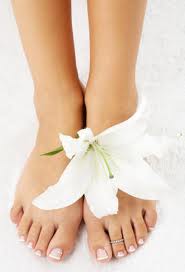 I was recently watching my favorite college football team play on TV. The game started in the evening and went pretty late into the night. When the 3rd quarter ended I went to bed. The last thing I did before actually turning in was check the game tracker on my phone to see how the game was going. My team was losing. The next morning, not knowing how the game turned out, I refreshed the game tracker thinking I would find out who won. According to the score, my team lost. There were big bold letters saying "GAME OVER". Those words "GAME OVER" were proof enough that my team lost. It wasn't the end of the world, but I could have been just a little happier had they won! About 2 hours later my son and his girlfriend informed me they had not lost, but in fact they had won! They even presented me with a video recapping the game. They won! I was happier (just a bit, of course)!

Most people (in their right minds) like to hear good news. Good news is just that...news that is good. For me, hearing my team had won, especially when I was sure they had lost, was good news!

Good news can be relative. What I mean is that depending on one's posture and outlook, good news can be good or bad. Let's say you're at the dentist for a routine check-up. The dentist says, "Looks like you need a root canal." To me that is not exactly good news. But let's say you've been suffering for a week, including sleepless nights with a tooth ache. It is obvious you need a root canal. You call the dentist's office to see if you can be seen and they say, "Come in immediately." That would be good news!

The truth is though, good news is always good for a person with an open heart. The Bible says, "Like cold water to a weary soul, so is good news from a distant land." (Proverbs 25:25) The greatest news ever shared was delivered like this: "Do not be afraid; for behold, I bring you good news of great joy which will be for all the people; for today in the city of David there has been born for you a Savior, who is Christ the Lord." (Luke 2:10,11) This announcement was the greatest news to ever be delivered. The angel Gabriel had come from heaven to announce this good news. From the original Greek word for "good news" we get the word "Gospel". The Gospel is the good news of Jesus coming to deliver us from our sins.

According to Paul in the book of Romans, the good news must be heard in order for one to believe in Jesus and be saved. This good news gives a person hope and the faith to believe. This is why the sharing of the Gospel is so important. Paul also says in Romans 1:16, "For I am not ashamed of the gospel, for it is the power of God for salvation to everyone who believes..." The good news of Jesus Christ is the power of God for a person to be saved. Not to overkill...but that is good news!

In order for the good news to be heard it must be proclaimed. And in order for it to be proclaimed, people who have already believed the good news and following after Jesus must be sharers of the good news. In Romans 10:15 Paul quotes a verse from the Old Testament to make a powerful point: "How beautiful are the feet of those who bring good news of good things." Paul is saying, "How beautiful are the feet of those who share the Gospel of Jesus." Remember, the Gospel IS the power of God for salvation for anyone who believes it. So let me ask you this question: How beautiful are your feet? I'm making a commitment right now to work on my feet! How about you?