How Short-term Mission Has Changed My LIfe (India Part 6) 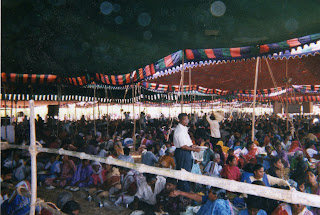 Two of the greatest experiences for me in all my travels to India came in 1998. It was only my second trip to India. I was in India for about 2 weeks. We conducted what is referred to as conventions in Jadcherla and Hyderabad, and we attended the annual gathering of India's largest Pentecostal denomination, The Indian Pentecostal Church (IPC).
I ministered 4 days in Jacherla, 4 days in Hyderabad, and we attended the IPC convention for about 3 days. I ministered about 12 times in Jadcherla and Hyderabad combined. We rested for a day and then headed out to Vijayawada which was about a 9 hour drive. I was extremely exhausted!
The first experience took place at the IPC convention in Vijayawada. The convention was amazing. I got to hear some speakers/preachers who spoke in English! In all attendance was around 20,000. I was scheduled to speak on a Friday afternoon about 1 pm. It was blazing hot under the conglomeration of open air tents. I was not a keynote speaker. This explains my 1 pm speaking time! The crowd was somewhat smaller; somewhere between 10,000 and 15,000. I lunged at this opportunity to speak to the hungry Christ-followers of India! I remember I preached about Jehoshaphat, and how he and all of Judah turned their attention to seek the Lord for deliverance from imminent destruction, at the hands of an alliance of enemies. The focus was not on circumstances...but on the miraculous power of prayer.
At the end of my message, as I usually do, I gave an invitation to prayer. And as usual I was quickly mobbed by hundreds of folks whose faith demanded the anointing God had placed upon me for this event. As the people were filing by for prayer, an little elderly man hobbled up to me and grabbed my hand. He quickly placed my hand on his leg. I must admit, at first I wondered what his ailment was (since I was now touching it). But by the level of God's power I sensed, I was sure everything would be alright...for me. The people came. I prayed on. It was exhausting...but extremely glorious.
After awhile, they had to close the prayer line. I was escorted back to Pastor G.R. Purushotham's little car where I waited for them to drive us back to the hotel. While I was sitting in the back seat of the little car, soaking wet, slurping down a 2 liter bottle of water, the little man came running (not hobbling) up to the car shouting. As he shouted, he also jumped up and down, pointing to his leg. He was ecstatic! Obviously the Lord had touched his leg. He was healed and delivered! I didn't need to understand the Telegu dialect at the time. His face and his actions completely told the story! Oh the goodness of the universal God we serve! One day every single knee will bow before Him and every single tongue will declare that He truly is Lord! 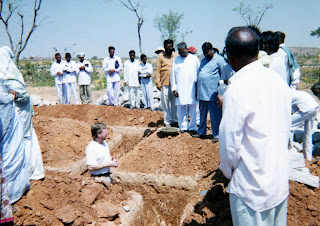 The second experience took place on my very last day in India. We left the IPC convention in Vijayawada on Sunday afternoon and headed back to Jacherla. We made it as far as Hyderabad and at 1 am we bedded down in a local church. The next morning (the day I was to fly out) we left for Jadcherla. Jadcherla was the home of Pastor G.R. Purushotham, a great man of God who for more than 65 years has made a difference in India by the preaching of the Gospel. Pastor Purushotham has raised up and commissioned literally hundreds of pastors who are serving in the state of Andhra Pradesh. He is the founder of the Bethel Bible School in Jadcherla. He also is my contact and the Pastor I have worked with in India.

We arrived in Jadcherla just in time for the dedication service for the construction of the new Bible School facility on the newly purchased land. What I didn't know was that they were about to ask me to lay the very first corner stone, and pray over it. When they did ask, I was overwhelmed and amazed at the opportunity. Hundreds of Pastors have passed through this school and are now serving in multiple churches in India! What an honor! I was truly grateful to be a part of it! I will never forget this experience.

The trip back to the States is always grueling. It is very long with numerous hours spent in layovers. At this point during any trip to India I am completely exhausted. You seem to run on something deeper than what you have. It God's grace and His Spirit! We had to travel another 3 hours to get to the airport in Hyderabad. I left India that time glad to be returning home. But unlike my first trip, I was already planning my return trip!