The Chronicles Of A Missionary (India Part 4) 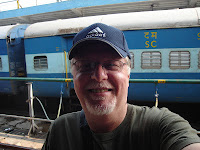 It was late February and I had just arrived in India. This was my third visit to the great nation. I had gone through the usual routine of getting into the Mumbai in the wee hours of the morning. This time I tried something new. I booked a hotel room for a few hours to shower, shave, and catch a quick nap before heading back to the airport for the flight from Mumbai to Hyderabad about 6:30 in the morning. I managed to accomplish two of the afore mentions tasks. I did shower and I did manage to shave!

When I arrived in Hyderabad I was picked up by Pastor G.R. Purushotham, the pastor I had been working with in India. We were taken to a friend's house in the city where I managed to complete the third task mentioned above...catch a nap. About 5 o'clock that evening we boarded a train for a city near the east coast. It was a 15 hour overnighter. I did (with the help of some motion sickness tabs) get a fairly good night's sleep. Note: This was only a 10 day trip overall which was shorter than my usual 14+ day trips. And due to the distance to this city, and the time it took to get there and back to Hyderabad, I only spoke in this city. We were there about 4 days. I did speak many times during this gathering.

This was probably the most physically taxing of all my travels to India...mainly because of my time limitations and the distance we traveled within India. We arrived in Vizianagaram the day after my arrival in Hyderabad. It was about 7:00 am. I had the rest of the day to rest before the meeting that evening in which I would preach.

I cannot accurately describe the hunger of the people in India for the preaching of the Word. What I can say is that it draws the anointing upon you to a higher level. As a result, not only did I preach like a house-a-fire, but the Holy Spirit manifested in more ways and with much more power than I had experienced in the States. It was extremely awesome...to say the very least.

One particular evening I preached on healing. It was a powerful service and my message was very powerful. Even though I was exhausted sitting on the platform, waiting to preach, I felt like superman as I preached under the anointing. Preaching through a translator can be challenging at times, but not this night. All flowed wonderfully. What I didn't tell Pastor Purushotham and those who so diligently took care of me was that I was going to have an altar call for healing. Made perfect sense right? Preach on healing. Give the folks a change to be healed through prayer. So at the end of my message I jumped (flat-footed) off the front of the platform and said something like, "If you want God to heal you, come NOW!" I looked up and there was a cloud of dust stirred up as a wall of desperate folks came right for me. The crowd had just began to press me up against the platform when I felt the arms of several pastors pull me back up onto the platform....to safety! I told them to let me back down and they did, but after the pastors made a buffer for me out of their human bodies.

God moved mightily as he touched the bodies and the lives of those spiritually hungry people in India. I've seen lame folks healed. Sick folks made well. Demoniacs set free and much more. Bareness is quite prevalent in India among young women. God has used me many times to pray for young married women who at the time were barren. On return trips to India I learned that many of them were healed! Yes, life is precious to God!

Every trip to India was filled with unique events...each that changed my life. I am eagerly awaiting God's direction for my next trip to India. I ask that you pray for me. Thanks!