Is Your God A Genie? 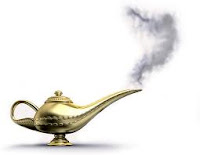 One of my favorite passages in the whole Bible is Psalm 40:1-3.  "I waited patiently for the Lord; and He inclined to me and heard my cry.  He brought me up out of the pit of destruction, out of the miry clay, and He set my feet upon a rock making my footsteps firm.  He put a new song in my mouth, a song of praise to our God; Many will see and fear and will trust in the Lord."
This passage is a perfect illustration of God's process of prayer.  First, David waited patiently for the Lord.  If we're not careful we will draw from this that David sort of "lounged" around while he waited on God to show up and do something!  But the key here is the two words "waited patiently".
These are actually treated as one word in the original language.  There are many closely related definitions of this word that give us a much clearer picture of what David is really saying.  "Waited patiently" here means:  to bind together (by twisting), to be gathered together, to be joined, to meet, to lie in wait for someone, to expect, to hope, to be confident, to trust, to be enduring.  We can clearly see that this word involves more than one person.  In this case two...David and God.  David was so intense in His seeking God that his actions could only be described by terms like:  binding together with, gathering himself together with, meeting with, lying in wait for, expecting, hoping in, being confident in, trusting in, and enduring in God alone!  David's example of "waiting patiently" for God was definitely NOT his lounging around, sipping on a Perrier - while waiting on God to show up and move!  This prayer was intense.  Going into it, David was prepared to pray intently for the duration.
Too often we treat God like a genie.  We mistake "faith" to mean that the more of it we have...the less our need to endure in prayer.  We send up a little prayer in Jesus' name and think God will meet that need immediately.  But many times the circumstances seem to endure and the breakthrough eludes us!  Why?  Because genuine faith (not genie faith) is tenacious and will not relent until results come!  Jesus said, "Ask, and it will be given to you; seek, and you will find; knock, and it will be opened to you.  For everyone who asks receives, and he who seeks finds, and to him who knocks it will be opened."  (Matthew 7: 7 - 8)  One translation says to "Keep asking", "Keep seeking", and "Keep knocking".  This clearly illustrates to us that prayer involves persistence and tenacity...and that many times the answer won't come until we persevere in prayer.  Some definitions accurately describe prayer as begging (as a slave would his master.)  This is the way David prayed.  After all, he was in the miry pit of destruction.  You may be there right now!
Listen to the form of God's answer.  David was in the pit of destruction.  When God began to answer, He brought David out of the pit and placed his feet upon a rock...making his footsteps firm.  Think about this.  When you're standing on miry clay you sink!  Where do you sink?  Into the pit.  The answer for David was for God to remove him from the pit and place his feet on a firm rock so he would no longer sink again!  I think this is totally and completely hunky-dory!!  God will do this for anyone including you!  Only it will fit your circumstances!  But God not only removed David from the pit and put his feet on a firm rock, he also put a new song in his mouth!  A song of praise to God!  As a result, many would see (not only hear), revere God, and put their trust in Him!  This is a longer post, but let me finish with this.  Earnest, tenacious, enduring, persevering prayer prevails!  Are you ready?  Start praying and don't stop until the results come!  God will make the way!
By Steve Hutto
Email ThisBlogThis!Share to TwitterShare to FacebookShare to Pinterest